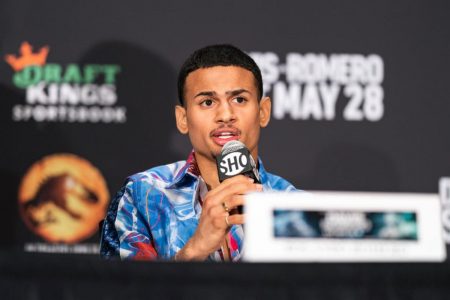 A few days have passed, and Rolando Romero (14-1, 12 KOs) has reflected on his fight in which he lost to Gervonta “Tank” Davis (27-0, 25 KOs), in front of a record-setting crowd at the Barclays Center in Brooklyn, New York.

“I lost to the better man that night, I felt was doing a good job backing him up with my jab,” said Romero when reflecting on the fight. “I was winning the fight and I made a mistake and got caught. I will work hard to get back to the top with the goal to become a champion. Much respect to Tank and I wish him well. The Rolly show must go on.”

Romero, who many discounted going into this bout, proved that he is one of the top lightweights in the world, and despite being listed as an underdog by the odds-makers, never appeared to be outclassed by one of the best fighters in the world until the knockout punch landed.

Romero has made it clear that he is already back in the gym and wants the very best competition that is available. Whether it is Ryan Garcia, Devin Haney, or George Kambosos Jr., Romero is interested in pursuing fights with all the top fighters in the division.

“I’ll be ready to get back in the ring as soon as my name is called,” said Romero in closing. “I know I got what it takes to be a world champion, and sooner then later, I will accomplish that goal. I made a name for myself and now I can get those big fights with all the top fighters in the division. Haney, Garcia, Kambosos, I want to fight them all. At some point, I will want my rematch with Tank, but I know I’ll have to work my back to that position.”