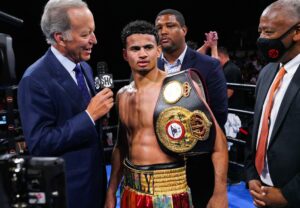 Rolando Romero retained his interim World Boxing Association (WBA) lightweight belt by technically knocking out Anthony Yigit in the seventh round on Saturday night at the AT&T Center in San Antonio, Texas.

The American of Cuban descent fought at long distance but attacked with hard punches at all times against an opponent who outweighed him. “Rolly” used his long punches well, especially the right hand, and managed to hurt the Swedish fighter early on.

At the end of the fifth round, Romero connected Yigit with a right hand that sent the European to the canvas and although his condition was quite bad, he was saved by the bell.

From then on it seemed a matter of time and, indeed, in the seventh round Romero again combined Yigit and knocked him down so the third man in the ring decided that enough was enough.

Romero remains undefeated and now has 12 knockouts in 14 fights, while Yigit has a record of 24 wins, 2 losses, 1 draw and 8 knockouts.