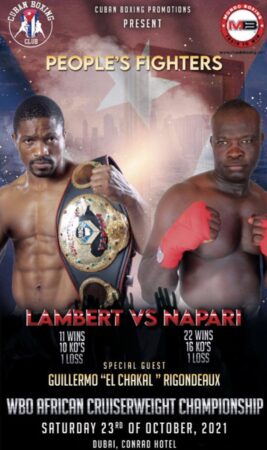 This Saturday at the Conrad Dubai in Dubai, sees the return of popular Cameroon cruiserweight Rolly Lambert Fogoum in a ten-rounder, as he goes up against fellow heavy-handed Ghanaian John Napari. The bout will be Fogoum’s first defence of the WBO Africa title he won in June, by KO against Pascal Abel Ndomba.

Fogoum (11-1-1, 10 KOs), on a winning streak of nine since his lone points defeat in his fourth professional bout, has a serious test ahead of him in Napari (22-1, 16 KOs) who is looking to make it a two bout winning streak after venturing into the heavyweight division. In that bout, Napari weighed a career high of 231 lbs, losing in the process.

Fogoum spoke to Boxen247.com: “The preparation for Saturday October 23rd has been very intense, smooth and great. John Napari is a very strong heavyweight fighter with an impressive KO number. therefore I have been into self punishment, preparing myself to absorb the worst blows he could ever throw at me. But to also be able to stop him from bullying me by hitting him even harder.

“Come Saturday night, it will be a very intense fight. I will not allow him to feel comfortable at all. I will make him doubt himself. I will establish my jab, back him away and victory shall not deny me. I’m calm, relaxed, confident and looking forward to fight.”

Both fighters carry power and especially in the first half of a fight, with both fighters stoppages mainly coming before the midway mark. When two fighters with power face each other, this can lead to either an early stoppage or the fighters can be wary, leading to a cautious start of the fight until an opening presents itself, either getting caught or via fatigue. We go for the latter.

After a cagey beginning with both fighters aware of the power the other carries, our pick is for a Fogoum victory in the second half of the bout by referees stoppage or a dominant points decision with Fogoum pulling away down the stretch.

The event will be held at the Conrad Dubai, with Fogoum-Napari the main event of a twelve fight card promoted by Cuban Boxing Promotions. 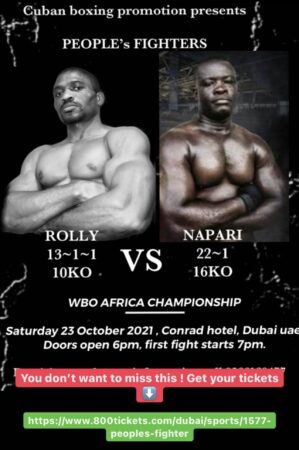