Romero will defend his WBA belt against Yigit this Saturday 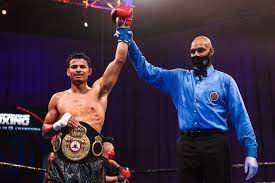 Rolando Romero will defend his World Boxing Association (WBA) Interim Lightweight title for the first time this Saturday against Swedish Anthony Yigit. The bout will be part of the Premier Boxing Champions event at the AT&T Center in San Antonio, which will feature Jermell Charlo and Brian Castaño.

Romero, 25, won his crown in August 2020 against Dominican Jackson Maríñez with a unanimous decision. The Cuban-born American had to work hard to defeat the Caribbean native in a tough, close fight that tipped the scales to his side.

“Rolly” returned for a fight against Avery Sparrow in January this year but his belt was not at stake and now he will be able to defend it against a European opponent.

Yigit is 29 years old and is more experienced than Romero. The Swedish fighter is moving down a weight class after having fought most of his fights at super lightweight. He comes into this championship fight on a three-fight winning streak and with a lot to gain.

Both men were at Thursday’s press conference and talked about what they expect from the fight as they step on the scales tomorrow. Romero is undefeated in 13 fights, with 11 KOs. Yigit, on the other hand, has 24 wins, 1 loss, 1 draw, and 8 KOs.