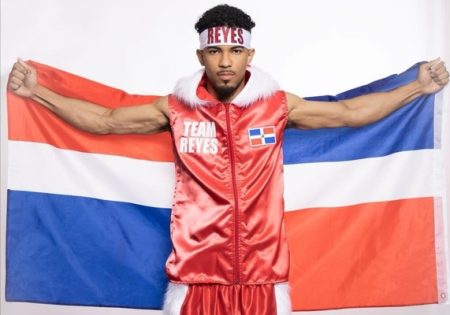 What makes a great fighter nickname? Some fighters like Star Boxing’s Richie “Popeye the Sailor Man” Rivera are given a nickname from their childhood that just sticks. Others are bestowed a nickname that fits the fighters out of the ring persona, like Star Boxing’s former WBO World Champion, “The Common Man” Joe Smith Jr. Then there are those that are given a nickname based on a fighter’s style inside the ring – enter, “RUTHLESS” RONNY REYES (New York, NY 1-0).

Reyes is set to fight for the second time at “Rockin’ Fights,” this Saturday October 1st, and will bring his ruthless in-ring aggression to ‘wow’ the anticipated sold out crowd. To do so Reyes will need to go toe-to-toe with TRAVIS “PRETTY BOY” CRAWFORD (Corpus Christi, TX, 0-1) over their 4 round super featherweight bout. The Reyes-Crawford undercard bout takes place on the same card as the highly anticipated pro debut of former MMA standout, JOHN GOTTI III (Oyster Bay, NY, Pro Debut) as well as the 10 round ABO Cruiserweight Championship bout between LYUBOMYR PINCHUK (Pittsburgh, PA 14-3-1 8KO’s) vs JOEL SHOJGREEN (Brooklyn, NY 13-3 12KO’S).

Reyes made his pro debut at Star Boxing’s, June 11th, “Rockin’ Fights” 42 where he had the crowd on its feet as he ruthlessly went to battle with then, fellow professional debut super featherweight, Hector Bacerra. Watch the fight highlights HERE. Reyes controlled the action against the game Bacerra in an exciting, four round all out brawl. After buzzing Bacerra a few times in the third and fourth rounds, Reyes would get the unanimous decision sweep (40-36 x3).

The trash talk has been heating up since the Reyes-Crawford fight announcement was made, and it will almost certainly spill into the ring come fight night on October 1st. In an interview with KRIS 6 News Corpus Christi, Crawford pulled no punches, “I feel like it’s going to be a landslide win. He throws very wide, very open. Those are mainly the fighters I like to get because it’s easy to counter them and pick them apart.”

Reyes, smirked at Crawford’s sentiment, adding for himself, “This fight I will demonstrate the true meaning of ruthlessness and why that’s me! I would also love to mention how boxing ain’t for everyone. [Crawford] will learn that October 1st and start applying for an office job.”

Whether you are team “Ruthless”, or team “Pretty Boy”, one thing is for certain, these two are ready to throw down. Very few tickets remain to Star Boxing’s “Rockin’ Fights” 43, as all ringside, all floor seating, all stage and all loge seats are SOLD OUT. Be sure to get your tickets before it is too late.