Round 12: A tribute to women’s boxing by Mauricio Sulaimán 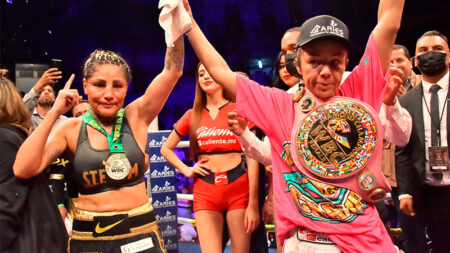 Tijuana dressed in pink last Saturday, hosting one of the most keenly anticipated fights in the history of women’s boxing, when Jackie Nava fought Mariana Juárez.

These two warriors have given Mexico a plethora of emotions, through their many years of being stars in the ring. Multiple world championships, with absolute dominance in television ratings on each and every occasion; both have dignified boxing and demonstrated the power of women.

Jackie, from Tijuana; La Barby, from Mexico City, in an explosive combination that reminds us of Erik Morales against Marco Antonio Barrera. Erik chose to help La Barby and was in her camp for this historic fight.

Twenty years ago the setting then, saw Erik supporting Ana María Torres in her corner, while Marco Antonio Barrera was with La Barby; on that occasion, La Guerrera Torres defeated Mariana, in a sensational battle in Mexico City.

This fight was absolutely wonderful; A demonstration of classic boxing, speed and precise combinations gave Jackie the overwhelming victory, but, on the other hand, Mariana fought with tremendous heart and sheer unwavering determination until the last second of the final round; With high technical level and competitiveness, she was always dangerous.

Jackie Nava was the first boxer to win the WBC world champion belt, precisely 15 years ago, and today she is the winner of the highest boxing trophy: the diamond belt, which on this one occasion was made of pink leather, recognizing, joining and honoring the global breast cancer awareness campaign.

Unfortunately, after a flight cancellation, I was unable to be present, leaving me stranded in Puerto Rico, where I attended a historic meeting with the Presidents of the other three boxing governing bodies in the world.

The meeting of the four presidents (WBC, WBO, IBF and WBA) in San Juan, Puerto Rico, turned out to be very productive, and we hope that it will achieve important agreements for the development of boxing in the short, medium, and long term.

I am very happy with the result of this lightning trip to Puerto Rico, land of champions, where I met with Francisco Valcarcel, Daryl Peoples and Gilberto Jesús Mendoza. It was a meeting open to change, respectful, and under the understanding that unity is necessary to achieve agreements that provide benefits to boxing.

Looking ahead, the week of the main fight of 2021 has arrived. Saúl Canelo Álvarez began a crusade in December of last year, with the aim of unifying the super middleweight division and conquering all four belts.

One final rival remains: Caleb Plant, IBF Champion. The fight drew worldwide attention, after the incident that occurred at the press conference in Los Angeles when, in the face-to-face, tempers heated up and a dangerous altercation occurred .

There seems tone a tendency of these unfortunate events in press conferences and weigh ins. Something must be done to put an immediate stop to this. It is dangerous, fights are placed on jeopardy and innocent people can get hurt when these brawls break out .

The Teotihuacán belt will be a special trophy for the winner of Canelo vs Plant , closing the 2021 cycle celebrating the diversity of cultures of the State of Mexico, and will begin the search for Mexican culture that will shine in the awards on May 5 and September 16, 2022.

So far, 10 emblematic belts have been produced since 2017. These special trophies have attracted the attention of the entire world for their exquisite beauty and the great significance that each one has, offering a piece of Mexico as a gift to the world.

This is the description of each one:
Huichol, May 2017: Canelo beat Chávez Jr.
Huichol, September 2017: draw between Golovkin and Canelo.
Chiapaneco, May 2018: Golovkin defeated Martirosyan.
Chiapaneco, September 2018: Canelo surpassed Golovkin.
Maya, May 2019: Canelo defeated Jacobs.
Maya, September 2018: Fury defeat Wallin.
Mazahua, May 2020: Dedicated to the Heroes of Humanity during the COVID-19 pandemic.
Otomí, September 2020: Delivered to Julio César Chávez for his career, during his exhibition fight against Jorge Arce.
Mestizo, May 2021: Canelo defeated Saunders.
Teotihuacán, September 2021: It is disputed on November 6 between Canelo and Plant.

The fight that projected Julio César Chávez to stardom was when he defeated Puerto Rican Edwin Rosario. Mexico vs Puerto Rico is one of the most iconic rivalries in our sport .

That fight had many themes of memory. That’s the origin of the traditional red band on Julio’s head since, according to Eddie Mafuz, Don King’s team coach, Rosario was bewitching Chávez and had a photo of him in a bucket of ice. Mafuz suggested that JC go out into the ring with something red to counter the witchcraft.

That night, Mike Tyson went up to the corner with Rosario; after that he became an admirer and friend of the great Mexican champion. Also, that night, Bruce Willis was celebrating his honeymoon with Demi Moore and were present at the Hilton outdoor arena for this great match …

On one occasion I traveled to Puerto Rico with Don José; I was about 22 years old and my uncle Antonio Esper was also there. Yamil Chade, who was my dad’s soul brother, took great care of us.

The island is beautiful, it has tourist and emblematic places, the food is delicious and the treatment is hospitable and very friendly. One of Don José’s favorite songs was “ Mi Viejo San Juan “ ( My Old San Juan ) and every time he could, he asked for that song to be played during the trip.

After a dinner with boxing people, I went to party in old San Juan … I arrived at the room at dawn without my dad noticing, but within two hours he was ready to start the day; Already at breakfast, he saw me and commented: “My son, you look very tired, it must be the trip and I have brought you up and down…”

Then, my uncle Toño told him: “No, Pepe, don’t you see the hangover he’s carrying!”; my father turned around innocently and asked my uncle: “But how, does my little son drink?” … That was Don José.