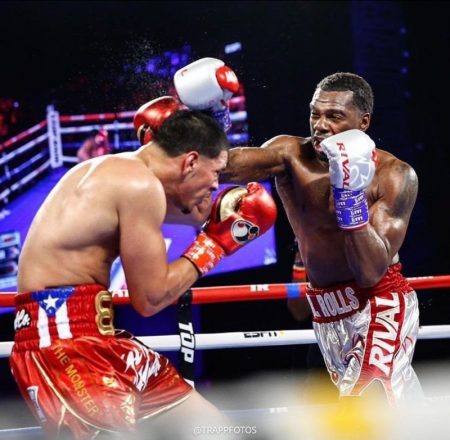 A brilliant co-feature sees a great 10-round matchup between Toronto’s Steve Rolls (21-2 12 KO’s) and the undefeated Shady Gamhour (13-0 9 KO’s). The fight was planned pre-pandemic, but unfortunately it didn’t go ahead. Now, the match is on – and we can’t wait to deliver to the fans in Toronto. Last time out Rolls took on the hard-hitting Edgar Berlanga, in his own city in front of a packed Madison Square Garden. A brilliant performance by Rolls lands him another huge fight. Shady Gamhour has stopped 9 of his 13 opponents as a professional, the other 4 he won on points – expect fireworks.

The main event on the evening will have the WBC Jr NABF Light Heavyweight Title up for grabs! Fan favourite Nick Fantuazzi (11-0 5KO’s) takes on Michal Loniewski (3-3 1KO) as they battle it out for the WBC title. Fantuazzi’s last performance against Darren Fletcher was a dominant and convincing win, Fantuazzi will look for a similar performance again to take the belt home with him. Fantuazzi was originally boxing for the Canadian Title but due to injury his opponent had to pull of the show. Loniewki’s last two fights were both in the UK against two British prospects. A treat for the fans as the two men put it all on the line for the title.

Also featuring on the card will be Amanda Galle (6-0), the Canadian Super Bantamweight Champion, as she takes on Jaqueline Mucio Munoz (7-10) in an interesting matchup that could leave either boxer with the win.

A professional debut for James Hughes, as the former Canada National Team member shows what he has to offer in the professional ranks. Hughes takes on Toronto’s Mikhail Miller (3-6-1).

Last up, welterweight prospect Joshuah Lupia (5-0 5 KOs) is back in the ring after a long absence due to a tragic incident that nearly cost Lupia his leg. It’s great to see that Lupia has recovered and we all look forward to seeing him back in action.

Tickets can be purchased on ticketmaster.com. For VIP Booths, please email sales@leebaxterpromotions.com.

REBEL Entertainment Complex is located at 11 Polson Street, Toronto, Ontario, M5A 1A4. On the night of the event doors will open at 6:30 pm ET, with the first bell at 7:00 pm ET.