Ruben Diaz: On November 5 I will be European Middleweight Champion 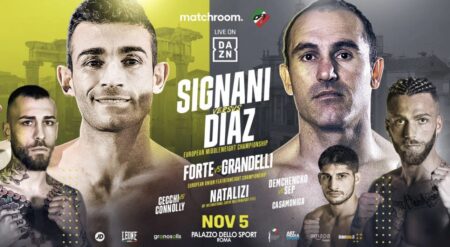 On November 5, at Palazzo dello Sport in Rome (Italy) European middleweight champion Matteo Signani (Italy) will defend against Ruben Diaz (Spain) on the 12 rounds distance in the main event of the Roma Boxing Night, promoted by Opi Since 82-Matchroom-DAZN and streamed live in 200 countries by DAZN.

Born in Cesena, 42 years ago, professional since April 2007, nicknamed “Il giaguaro = the jaguar”, military of the Italian Coast Guard, Matteo Signani built a record of 38 fights with 30 wins, (11 inside the distance), 5 losses and 3 draws. He won the vacant European middleweight belt beating on points Gvorg Khatchikian (Holland) in Trento (Italy) on October 11, 2019 and defended it knocking out Maxime Beaussire (France) on October 10, 2020 in Caen (France). In his way to the top Matteo Signani also won the Italian and European Union middleweight titles.

Professional since October 2002, also 42 years old, nicknamed “El destructor = the destroyer” Ruben Diaz has a record made of 30 fights: 26 victories (17 inside the distance), 2 losses and 2 draws. He won the titles of Spanish and European Union middleweight champion. In the super middleweight division he became champion of Spain.

“Yes and I consider him a very good fighter. That’s why I have been working for several months with Jesus Labrador, a well known coach here in Spain. This will be my last fight and I want to close my career as European middleweight champion.”

If you become European champion, you’ll receive offers to defend the belt. Could you change your mind about retiring?

“Right now, the answer is no. I had a good career, the European title would make me feel satisfied”.

“Middleweight. I fought for the super middleweight championship only because I had the opportunity to do it and I won.”

Do you have a famous champion as idol?

“I never had any boxing idol.”

When you retire, will you become a trainer?

“I don’t think so. I will keep training because I like it, but I won’t work in the boxing business.”