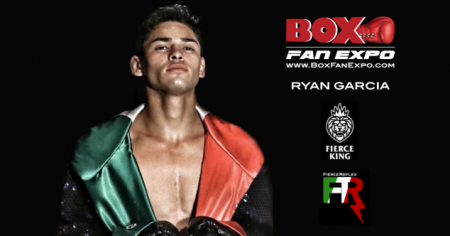 Boxing Star Ryan Garcia has confirmed that he will appear at the Sixth Annual Box Fan Expo on Saturday, September 17, 2022, at the Las Vegas Convention Center from 10 a.m. to 5 p.m. The Expo will also coincide with the mega trilogy fight between Canelo Alvarez vs Gennadiy Golovkin, that will take place later that evening at the T-Mobile Arena.

Ryan will meet with his fans at his booth during the fan event held over the Mexican Independence Day weekend.

Ryan will make his first appearance at this years’ Expo and fans will have an opportunity to take pictures at his booth where he will have merchandise on sale with his own line of clothing design apparel FIERCE KING.

Ryan Garcia is one of the most dynamic and exciting boxers fighting today. With a 23-0 record and 19 KO, the young Mexican American fighter has earned accolades include holding the WBC interim lightweight title, beating top contenders such as Olympic gold medalist Luke Campbell. Garcia has now moved up to the junior welterweight division, winning his first fight at 140 via knockout against the formidable Javier Fortuna. At just 24 years old, he has already built one of the most impressive resumés of his generation.

In addition to his feats in the ring, Ryan runs his own fashion line, Fierce King, and serves as the face of the Fierce Reflex bag, the ultimate reflex training tool for combat athletes.

His passions for sport at the highest of levels, mental health advocacy, fashion, as well as his unrivaled social media presence with more than 15 million followers across Instagram, TikTok, and YouTube, have brought thousands upon thousands of new fans to boxing.