Ryan Kelly back in the ring this weekend in Edgbaston, Birmingham, UK 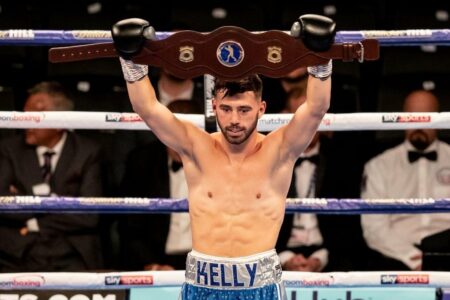 The road to redemption begins on home turf at the H Suite in Edgbaston, Birmingham, on a weekend double-header of shows staged by BCB Promotions, set for October 16 and 17.

Brummie Kelly is part of Saturday night’s line-up, where he will look to redress the balance going into his 18th pro contest, targeting a 15th victory.

He raced to 8-0 before his first title challenge, taking on Adam Harper for the area crown where a points decision went against him, with two points between them (97-95).

Kelly rebounded to claim the vacated Midlands crown by seventh round stoppage over Owen Jobburn, one of seven stoppages on his pro ledger.

‘Ruthless’ wiped out Kelcie Ball in just a round of his one and only title defence, before dropping to welter to vie for the WBC International Silver bauble against Michael McKinson.

A jaded Kelly laboured to the end of 10 rounds with little for him on the scorecards, McKinson prevailing unanimously prevailing by verdicts of 99-90, 93-97 and 92-97.

The next title test was his last outing, for the WBO European super welter strap two years ago, where Hamzah Sheeraz proved to be too much with a TKO in six.

Kelly was based in Dubai then, where he subsequently married wife Abi before heading home in February. His first child, daughter Frankee, arrived three months later.

The 27-year-old, who is from Chelmsley Wood, has also returned to trainer John Costello, along with inking a promotional deal with BCB’s stewardship.

He said: “It’s good to be back on home soil and I just want to get active again. I’ve made a few changes, to my team, which includes being signed to BCB.

“I’m back with John Costello, who was my first amateur coach when I was nine. For me, he’s the best in the business and I’m learning a lot from him again.

“I’ve been out in Dubai. I took a job there, as a personal trainer, teaching people how to box and keep fit. It just came at the worst possible time, with the pandemic going on.

“I was living there when I had my last fight, which was a bit silly really. I didn’t really get the notice that I needed and I had no punch resistance, from cutting the weight too fast.

“The result was mine to lose, though. I was two points up, with all three of the judges. I do rate Hamzah Sheeraz, though, and I think he can go a long way.

“I can honestly tell you that I’ve never backed down from anyone. Fighters fight. I was the same as an amateur. I beat some good kids (won 55 bouts), but I lost a few as well (12).
“I’ve had the four defeats, as a pro, before Sheeraz I had to get down to welter for Michael McKinson, which I shouldn’t have done. I was a bag of bones in there.

“I’m 5ft 11in, with broad shoulders and big legs, so I was always going to find it hard. I just had no strength and I did well to see the end of it.

“I’ve shown I can bounce back. I won the Midlands title, at the second attempt I got the belt, in the end, and Owen Jobburn came into it with a winning record. I ended up catching him and it was the same thing against Kelcie Ball.

“There is more to come and I’m too long in the game for backward steps. People might think I’m past it, so it’s down to me to prove them wrong and get the buzz back about me.”

Tickets for the Birmingham bills are available now, priced at £40 standard or £75 VIP ringside with buffet per day, directly from the boxers or by visiting myfighttickets.com.