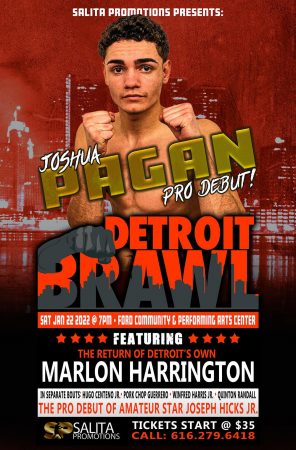 After starting boxing at age 13, in honor of his trainer/father Tony who also boxed, Pagan had approximately 90 fights as an amateur, culminating in winning three State Golden Gloves Championships and this year’s USA national Championships in Shreveport, Louisiana.

A smooth boxer with a mean streak, 21-year-old Pagan will make his professional debut on Saturday, January 22, 2022, in the Lincoln Ballroom of the Ford Community & Performing Arts Center in Dearborn, Michigan, as Salita Promotions returns for another instalment of their popular “Detroit Brawl” series of professional boxing shows.

“I’ve been part of the amateur boxing game for a while now,” explained Pagan. “It’s time to challenge myself again and start something new. Pro boxing is the same sport, but a different game. I want a new challenge.”

“I’ve watched some fights of his on YouTube,” revealed Pagan. “Mitchell is a rugged guy. I can’t overlook him because it only takes on mistake. I’m going in there to get my first win and showcase my skills and show the Detroit fans what I can do.”

A non-stop student of the sport, while working with his father/trainer Tony, Pagan says he’s been sparring more rounds than usual against local professionals and picking up their tricks of the trade to prepare.

“I feel I got a good deal and he seems real straightforward and genuine,” added Pagan about the deal with Salita. “We got hooked up by my good friend Joseph Hicks, who is also fighting on the card. I sent him some of my fights for Dmitriy to watch and he liked what he saw, so he told us to get a hold of him. I want to win a world championship. I’ve always dreamt of being on the big stage and fighting in the big fights. I don’t get nervous in big fights. If anything I get more focused. I’m more than ready and very excited for this new challenge. I’m ready to go. I’m training hard and I will be in the best shape I’ve ever been in on January 22.”

“He seems like a really down-to-earth guy,” added father Tony. “He seems like a good promoter and we think he’ll help us grow and do what we have to do. Joshua’s greatest strength is that he’s willing to work hard and wants to keep learning. Those are his best assets. He never stops learning and he really loves the sport.”

Promoter Salita, who has enjoyed several successes in his mission to help revive Michigan boxing, says Pagan is a talented new addition to his growing stable.

“Joshua is a young new talent with tremendous potential,” said Salita. “He’s a very hard worker in the gym with exceptional boxing skills. He’s a new prospective star from the state of Michigan and I’m happy to be working with him and his father to help them reach his potential. He has a lot of fans coming out to watch his professional debut, which will be against a tough opponent with nine more fights.”

In the night’s co-main event is power-punching undefeated Detroit middleweight “prospect to watch” Marlon Harrington (5-0, 4 KOs) will appear in a six-rounder vs. TBA.

Tickets for “Detroit Brawl” start at $35 (service fees will apply). Order tickets online or call or visit the Ford Community & Performing Arts Center Box Office (ph: 313.943.2354) at 15801 Michigan Ave. in Dearborn during Box Office hours: Thursday and Friday from 11 am to 4 pm and 5 pm to 8:30 pm on the day of the event. PLEASE NOTE: tickets ordered online will be mailed up to one week prior to event date. Tickets ordered within a week of event will be placed in will call in the box office for pickup. A limited quantity of VIP tickets are also available by calling Lina at 313.529.7604.