Sam Daly finally comes back home to fight this Friday 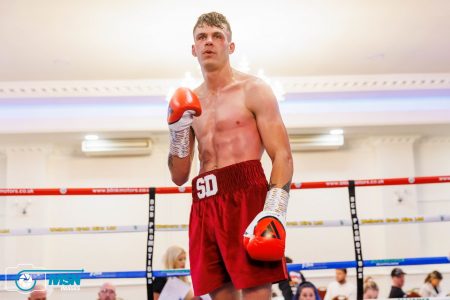 Sam Daly finally comes back home to fight with a first ring date in his hometown since back in his amateur days.

He returns to the ring when BCB Promotions stage a show at the Park Inn Hotel, in Northampton town centre (Silver Street), when fight night arrives on Friday September 9.

Daly’s pro debut was originally supposed to be in Northampton, in March 2020, but he would have to wait until June of this year to turn over.

Nearly four years of frustration were expelled on his bow, where he outpointed George Rogers without losing a round, the referee calling it 40-37.

The 26-year-old super welterweight was back in action 42 days later, recording a points shut-out over Paul Cummings, the verdict on that occasion 40-36.

Daly comes from a fighting family and has an amateur grounding under his father, Arthur, at Kings Heath Boxing Club, which saw him come close to becoming a national champion.

His amateur career saw him rack up 36 wins from 47 amateur bouts and he reached the final of the 2013 National Association of Boys and Girls Clubs (NABC) competition.

He’s now coached by James Conway, training out of the Team Shoe Box gym in Northampton, where his next assignment will take place.

Daly said: “My first scheduled pro debut was supposed to be in Northampton, so I’m really looking forward to this one. I’m excited about it.

“There’s no more pressure on me than when I actually made my debut, which is the most nervous I’ve ever been and that includes a national final (as an amateur).

“That was tough for me, having been out of the ring for so long, but I’ve felt a lot more comfortable in the ring since then. I’ve eased back into it and come into my own.

“I think that you will see a more accomplished performance from me and I’ve only drawn one round since my debut. I won all four rounds, last time, so I was happy enough.

“On the night, I was confident of getting him out of there, but I caught him with some good shots and he wasn’t going anywhere, so a comfortable points win was all I could ask for.

“I was standing there for too long and getting caught with silly shots, on my debut, so my movement and the way that I changed angles to throw my punches was better.

“I think I’m doing a pretty job of developing, so I’m content with where I’m at and I feel more and more confident in sparring, because I’ve improved a lot.

“If the option is there of a stoppage, I’d love for that to happen, but I just go in there with the mindset to outclass and school my opponent. The rest should fall into place.”

Tickets for the Park Inn bill are available, priced at £40 for unreserved seating or £75 VIP ringside with buffet, directly from the boxers or by visiting myfighttickets.com.