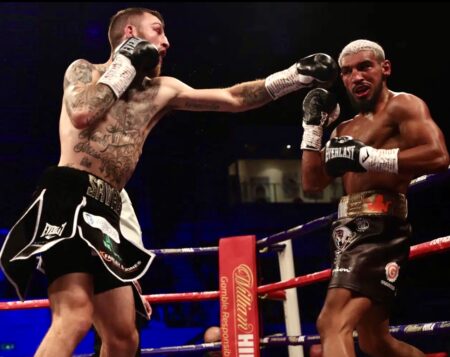 Sam Eggington and Bilel Jkitou’s brutal Fight of the Year epic will be show again at an exclusive select audience screening on Monday 4th October at The Mockingbird Cinema in Birmingham’s iconic Custard Factory.

WBC Silver Middleweight Champion Eggington went to war with French rival Jkitou earlier this month at the Coventry SkyDome Arena and from the opening bell it was an unbelievable encounter that has been hailed as the best fight seen in this country in the last decade.

After an exhilarating twelve-rounds that left the crowd and viewers watching live on Channel 5 in shock at the sheer ferocity, relentless pace and pure brutality, Eggington’s hand was raised after winning on the judges scorecards by split decision to retain his crown.

Seen on the small screen by millions, promoter Mick Hennessy and Eggington’s manager Jon Pegg have now ensured that the fight receives its big screen premiere in the Birmingham hero’s home city plus the highlights from the action packed undercard on the night.

Eggington will attend the screening with the other Midland stars of the Eastside Gym, including Shakan Pitters, Kaisee Benjamin and River Wilson-Bent and some of the other boxers that featured on the card, plus Michelin starred chef and boxing fanatic Glynn Purnell.

“I’m a big fan of the Rocky films and I’ve always fancied myself to be on the big screen one day and now that’s come true!” Said Eggington.

“At the time you don’t think how great it’s looking on TV because you’re so involved and focused on the fight and making sure you’re on top and winning and landing the better and harder shots. Only afterwards after watching it again did I think ‘You know, that was something a bit more special than usual’.

“The fight went out to a massive live audience on Channel 5 that received fantastic exposure and now I’m thrilled it will be replayed at the Mockingbird Cinema in my home City.”