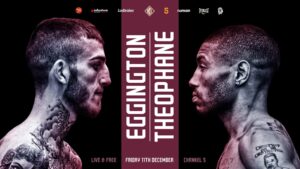 Fight Notes: Bout made at super welterweight. Theophane was down in the 2nd and 6th round. Referee John Latham stopped the bout at at 2:58 of the 6th round.

Fight Notes: Bout made at super welterweight and scheduled for 6 rounds.

Fight Notes: Referee Ian John Lewis’s stopped the bout at 1:54 of the 5th round.

Sam Eggington: “Back in August I felt I was hard done by, so I needed to come back with a good win and prove my point.” Eggington said. “As soon as we knew we were fighting Ashley, we knew he was tricky and hard to hit, so you go for the bigger target (the body). He is really good at tucking up, so they were hard to get through, but the ones that did get through I could feel were working.

“I’m quite happy to fight Ted Cheeseman in his back garden. I feel like I won the first fight, so why wouldn’t I go anywhere and box hm again? I’m not chasing anyone. I am quite happy to push on with my career without following people about and that has worked for me as of now.”