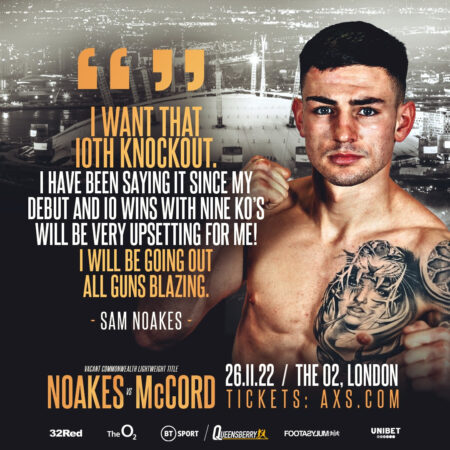 Sam Noakes is back in search of a perfect 10 when he makes his return at the O2 Arena on November 26 after making his recovery from a broken thumb, live on BT Sport.

Thrill-a-minute lightweight Sam was due to fight back in July before a sparring injury sustained while working with Archie Sharp put him on the missing list.

Now he is set to fight for the Commonwealth title against the unbeaten Scot Calvin McCord on the undercard of the big Zach Parker-John Ryder clash for the WBO Interim world super middleweight title.

“Camp was going well and I was sparring Archie,” reflected Noakes, 25. “I think it was the seventh or eighth round, right at the end, and I switched through, misjudged the distance and hit him on top of the head. I thought ‘that hurt’, then I carried on, hit a few jabs out and it was still hurting.

“So I stopped and they took my hand out of the glove and my thumb was wedged underneath. I went to the hospital and, after the x-ray, she called me straight in. I thought ‘this ain’t good’ because normally you are just sat there if it is not urgent and they just leave you there.

“So I’ve been out for eight months and I’m an old has-been now… All forgotten about.”

“I’ve fallen on my feet here though, having the Commonwealth title, so I am happy with that.”

Noakes resisted the temptation of becoming a couch potato during his absence and hit the road to keep in trim.

“As soon as I got the solid cast on I was running straight away. If I had sat about eating when I came back I would be a middleweight! So I kept ticking over and I was lucky to only have it on for about four weeks. When it came off I was pushing weights and I was happy just to be back in the gym.

Tickets for Zach Parker vs John Ryder for the WBO Interim Super-Middleweight Championship at The O2 are on sale now, available from axs.com.