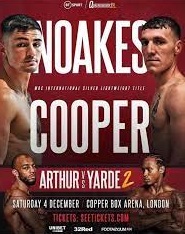 The town of Maidstone in Kent will see a significant decrease in population numbers on Saturday evening when young resident Sam Noakes gets to challenge for a first title in just his eighth fight as a pro.

The 24-year-old lightweight will compete for the WBC International Silver title against Shaun Cooper (11-2) at the Copper Box Arena in Stratford, live on BT Sport.

He will be far from alone in East London because he has personally sold over 450 tickets for the event headed up by the blockbuster rematch between Lyndon Arthur and Anthony Yarde. The Maidstone contingent will be swelled even further by the considerable support attracted by fellow Kent folk Dennis McCann and Karol Itauma, who also feature on the card.

“The Maidstone Massive will be out in force,” said Noakes at an undercard media event staged at the old Peacock Gym in Canning Town. “I can’t wait to get in there and I’m very excited.”

Noakes admits that a title being on the line has raised the stakes and also upped his game during preparations at the Queensberry iBox Gym in Bromley.

“It’s different and you are more focused on it, you train that little bit harder and your focus is definitely better.

“What I do know is that I get a nice little green belt at the end of it.

“He (Cooper) is tough and I don’t think I will have to go looking for him, which is unusual for me, so it will be nice to be honest. It is going to be a brilliant fight,” he added, before stating his devout intention to keep his run of stoppage finishes moving towards 10 out of 10..

“If I can stop him in under eight, that would be nice. It would make it eight in eight for me and I want that 10. I’ve got a longer time to do it with 10 rounds.”

In other news, Noakes on Monday signed a new contract to extend his promotional agreement with Queensberry, as well as his management association with Francis Warren.

“I am very happy with the way my career has been dealt with so far,” he explained. “I’ve got a good connection with Francis and I am happy where I am. If it isn’t broken don’t fix it and we will keep doing what we’re doing.

“I have been told I will be back out again in February and that is all I know really. Tell me when and I will fight and train, that is all I do really, just keep it simple.

“It has all been sweet for me, seven KOs and getting a little title fight before the end of the year!”

In the bill topper Manchester’s Lyndon Arthur (19-0, 13 KOs) defends his Commonwealth and WBO International Light-Heavyweight title against Ilford’s Anthony Yarde (21-2, 20 KOs) in a rematch of last December’s controversial clash that he won on points.

Tickets for the event can be purchased here