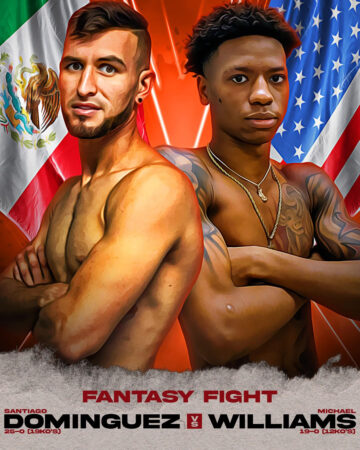 (This is the first story in a short “Fantasy Fights” series about boxers who fought in 2021 on RJJ Boxing on UFC FIGHT PASS cards to be matched next year in potentially explosive fights on the same platform.)

UFC FIGHT PASS® is the world’s leading digital subscription service for combat sports, on which RJJ Boxing has streamed live and exclusively for the past three years. To sign up for UFC FIGHT PASS, please visit www.ufcfightpass.com.

“Throughout the long, rich history of boxing,” veteran RJJ Boxing matchmaker Guy Taylor explained the genesis of ‘Fantasy Fights,’ “fans have always asked, ‘What would happen if these two ever fought each other.’ You couldn’t ask for a more polar opposite match-up than Santiago Dominguez and Michael Williams, Jr.”

Dominguez vs. Williams, Jr. is a classic contrast of styles, featuring a pair of gifted, undefeated welterweights seemingly on the verge of stardom.

RJJ Boxing on UFC FIGHT PASS has helped boxers develop their skills in highly competitive matches, in addition to providing invaluable exposure worldwide, since 2019 despite the COVID-19 pandemic.

The heavy-handed Dominguez, who is a former NABF Welterweight Champion and past No. 15-rated in the world, stopped former WBA World title challenger Jesus “Chino” Antonio Rubio (13-4, 7 KOs) for the vacant WBC Latino strap in the October 15th main event in Mexico. It was Dominguez’ only fight in nearly a year because he needed to give his body a break. Dominguez improved to 5-0 (4 KOs) fighting career-wise on RJJ Boxing on UFC FIGHT PASS.

“Santiago is a throwback Mexican fighter, who stands 5’ 8” and was born in Ciudad Obregon Sonora, Mexico, just like his hero, the great Julio Cesar Chavez, Sr.,” Taylor added. “Williams, Jr. is a flashy, fast-footed boxer with lightning-quick hands who stands 6’ 1”. To put that in context for a welterweight, Michael is the same height as Hall of Famer Thomas ‘Hitman’ Hearns. Williams is also trained by arguably the greatest all-around fighter, Roy Jones. Jr.”

“This is a fight that can easily be made given the status of both fighters from RJJ Boxing on UFC FIGHT PASS. I truly feel that, stylistically, there is no better match-up in 2022 than an undefeated, power-punching Mexican against an undefeated, slick, counter puncher from the United States. And they are both approaching their prime.”