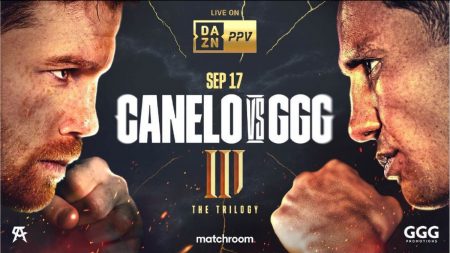 Saul ‘Canelo’ Alvarez and Gennadiy ‘GGG’ Golovkin will meet in an epic trilogy clash on September 17. Canelo vs. GGG III will be live on DAZN Pay Per View in the U.S. and Canada and around the world on DAZN (excluding Mexico, Latin America, and Kazakhstan) and is presented by Matchroom, Canelo Promotions and GGG Promotions.

Alvarez dared to be great once again in his last outing but was edged out by WBA World Light-Heavyweight champion Dmitry Bivol. Now the focus switched back to Super-Middleweight where he will defend his undisputed title against the Kazakh king, who campaigns at the weight for the first time in his storied career.

Alvarez and Golovkin have shared 24 thrilling rounds already in this hottest of rivalries and the pair will meet for a third time, five years after their first battle ended in a controversial draw and then the Mexican star edging out Golovkin via majority decision.

Both fights took place in the T-Mobile Arena, and while a venue for the trilogy bout will be revealed soon, what is in no doubt is that it will be the hottest ticket in sport when these two foes dance for the third and decisive time.

“I feel very happy and proud to be able to give the best fights and this fight won’t be an exception,” said Canelo.

“I hope to see you on September 17,” said Golovkin.

“The Canelo vs. GGG trilogy is the biggest fight in boxing and I am delighted to get this made for September 17,” said Eddie Hearn. “These are two men that bitterly dislike each other and want to end this incredible series with a blistering KO.

“I truly believe this will be the most thrilling fight between these two great champions and it will be fireworks from the first bell to the last man standing.”

“What a few weeks we have had on DAZN – the biggest women’s fight of all time, an absolute barn burner in Las Vegas, and now, the highly anticipated trilogy fight between the pound for pound King Saul Canelo Alvarez and one of the biggest names in the sport Gennadiy ‘GGG’ Golovkin,” said Ed Breeze, EVP Rights, DAZN. “The last two fights between these two have been up there with the very best this century and we look forward to broadcasting it to fight fans live and worldwide on DAZN.”