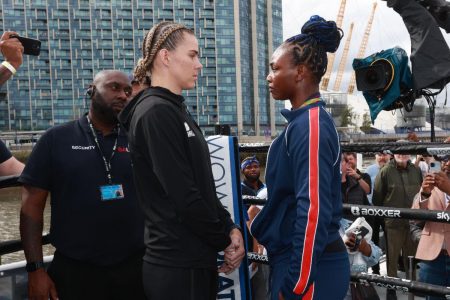 A special fight deserves a special build-up, so BOXXER chartered a vessel to take bitter rivals Savannah Marshall and Claressa Shields – plus a host of British media – down the Thames river for open workouts and staredowns in the shadow of the iconic London Tower Bridge.

Joining the crew on the ‘BOXXER Battleship’ were co-main event fighters Mikaela Mayer and Alycia Baumgardner and some of the standout British fighters from the landmark all-female card, including Lauren Price, Karriss Artingstall, Caroline Dubois, April Hunter, Georgia O’Connor, and Ebonie Jones.

As the city’s greatest landmarks rolled by, the array of stars took to the ring to work out ahead of competition on Saturday in front of the assembled media and a platoon of stars from the world of women’s spot, including Fara Williams, England’s most capped football player, and Olympic 400m Gold Medalist Christine Ohuruogo.

Super Featherweight Champions Mikaela Mayer and Alycia Baumgardner also faced off before their clash on Saturday night, with the pair trading barbs on social media for months on end, all coming to an explosive conclusion this weekend at the O2 Arena, live on Sky Sports.

Savannah Marshall said, “She’s had a lot to say about me but it doesn’t bother me, it doesn’t get under my skin. I don’t care what she thinks about anything – she’s not one of my friends or family so her opinion doesn’t mean anything at all to me. We will do our talking in the ring on Saturday night – I’m going to take her into deep water and drown her in the Thames,”

Claressa Shields said, “I’ve always said that women’s boxing can sell and that I was the one. It’s nearly sold out, there will be nearly 20,000 fans in the O2 Arena and I’ve been training my butt off. I want all the smoke and when I leave the ring on Saturday night, Savannah Marshall will be silenced and I will be the undisputed middleweight champion of the world,”

Fara Williams, England’s most capped footballer: “This event is amazing, and it shows how far women’s sport has come from a few years ago. BOXXER have taken a huge risk here and it’s a good thing that it’s been done. It’s going to be a history-making event in front of 20,000 people, and there will be an undisputed Middleweight Champion. And hopefully an English one too.”

Christine Ohuruogu, Olympic 400m Gold Medalist: “This is a once in a lifetime opportunity in boxing. An all women’s card, never happened before. Hopefully events like this in boxing will happen again. This follows on from the amazing women’s football in the summer. I’m so happy to see women’s sport with such positive momentum.”

Tickets for the event are almost sold out, with a small batch remaining in the £25 category. A full house is expected in London 02 Arena on Saturday night for this landmark moment in women’s sport.