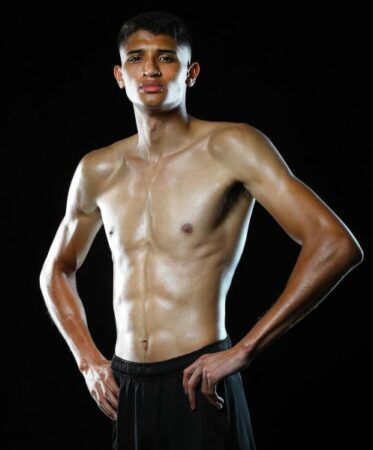 Unbeaten super welterweight contender Sebastian “The Towering Inferno” Fundora plans to make the most of his opportunity stepping up in competition when he faces fellow unbeaten Sergio Garcia in a WBC Super Welterweight World Title Eliminator Sunday, December 5, which serves as the SHOWTIME PPV co-main event for Gervonta Davis vs. Isaac Cruz live from STAPLES Center in Los Angeles.

“Of course I see this as a step up fight,” said Fundora. “He’s ranked number two by the WBC for a reason. I want to show that I’m going to become a world champion. This is the next step toward reaching my goal.”

The 23-year-old Fundora has shot up the rankings and made a name for himself as must-see T.V. by engaging in numerous action fights. Since an August 2019 split-draw against Jamontay Clark, Fundora has won four-straight fights, including three in a row by stoppage. Amongst those three stoppage triumphs he became the first person to stop Nathaniel Gallimore and most recently dominated veteran Jorge Cota in May.

“We just want to keep winning and moving up with each fight,” said Fundora. “I’m just staying on the same routine so that I’m always ready for what’s coming next. We went right back into the gym after the Cota fight. I don’t ever worry about overtraining or anything like that, because we stay on a consistent routine of training hard.”

Fundora comes from a deeply-rooted boxing family, as both of his parents were fighters, in addition to his 19-year-old sister Gabriela, who sports a 4-0 professional record. That familial support has helped him remain focused on his goals while navigating his professional career.

“My parents taught me to respect the sport and it’ll respect you back,” said Fundora. “They also taught me that hard work pays off and that it shows up in every fight. I’ve learned that I just have to stick with the plan and keep improving day by day.”

A Coachella, California-native, Fundora will return to fight in Southern California for the second-straight fight after beating Cota in Carson in his last fight. Fundora is relishing the opportunity to again fight on friendly terrain, this time on the big stage downtown at STAPLES Center.

“This is home for me,” said Fundora. “It’s great to be fighting back-to-back times in Southern California. I went to STAPLES Center for a Vasyl Lomachenko fight before and it was a great atmosphere. I’m sure it’s going to be even more lively on December 5. I’m super excited for the opportunity to put on a great show for my fans that are there on fight night.”

With the 154-pound title belts currently held by unified WBC, IBF and WBA champion Jermell Charlo and WBO titlist Brian Castaño, who fought to a draw in July on SHOWTIME, Fundora plans to keep making steady improvement until his opportunity to fight for the belts arises.

“When the time comes to fight for the title, I’ll be more than ready,” said Fundora. “I’d love to fight Charlo or Castaño, but I’m just focused on taking it one fight at a time and facing whoever has those belts when my number is called.”

Tickets for the live event, which is promoted by Mayweather Promotions, GTD Promotions and TGB Promotions, are on sale now and can be purchased at AXS.com.