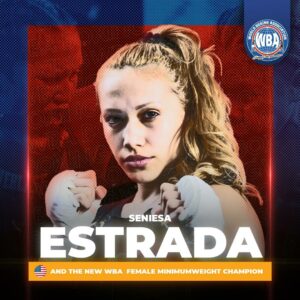 In a vibrant performance, the young American star born in East Los Angeles, Seniesa “Super Bad” Estrada became the new World Boxing Association 105 lbs. champion after dethroning the Mexican Anabel “Avispa” Ortiz by unanimous decision in ten rounds. The fight was the co-feature of a great event at the Dickies Arena, Fort Worth, Texas, United States.

Avispa planned to take the fight to the terrain in which she knew how to conquer her fights; with two punches and outs, keeping the distance and getting little in the short distance. However, such approach was not effective against the speed of a complicated boxer like Estrada. The first round began with Super Bad’s decision to keep the title as she had already said in a press conference: “now it’s my time”.

Both fighters put all their arsenal into action. In the second round, the Mexican fighter went to the canvas when Seniesa landed an accurate right cross to the chin. Ortiz was able to recover to reach the end of the fight, being able to show off her experience in bursts that were not enough to overcome the young Mexican descendant who has a strong desire to reign in several categories.

With a footwork, constantly changing her guard, with the emulation of her idol Roy Jones Jr. with a defense in place by moving her trunk, head and throwing punches simultaneously, Estrada showed her best performance in a lesser category for her and proved to be in good physical condition for the division.

Thus, Super Bad remains undefeated with 19 fights, and 8 KOs. Owner of the WBA Interim Flyweight and absolute Minimumweight belts, after a great performance, she declared that now she wants to return to the Light Flyweight category to face Yesenia Gomez or Argentina’s Yesica Bopp.