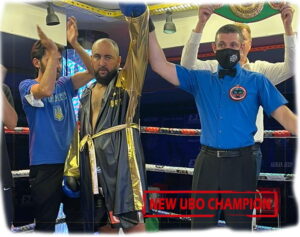 Despite Covid restrictions continuing to make everything difficult for promoters and boxers, the sport continues all over the world as people with will almost always finds a way.

In front of a sparse crowd on home-turf in Istanbul, the hard-punching Avci wasted little time stopping Taryel Jafarov from Azerbaijan in the very first round.

A knockout was expected in this fight, as neither man is used to going the distance, Avci bringing a 100 percent knockout ratio and Jafarov having scored all but one of his victories by stoppage.

With top notch preparations at the famous 5th Street Gym in Miami, Avci looked determined and sharp, overwhelming Jafarov from the first bell and never allowing the man from Baku to get started.

The fight headlined a show promoted by Serdar Avci Promotions.

Edmund Zefi vs. Luigi Alfieri For UBO Youth World Title in Kosovo August 7 Romero will defend his WBA belt against Yigit this Saturday