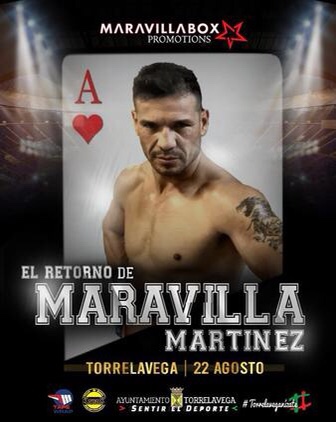 Having last fought in 2014 against Miguel Cotto and in doing so losing his world championship, Sergio “Maravilla” Martinez (51-3-2, 28 KO’s) is making his ring return against José Miguel Fandiño (15-6, 8 KO’s) on August 21st in Cantbria, Spain.

Martinez, 45, is supported by promoter Lou DiBella even if he would prefer for him to stay retired.

“We’re close friends, I love that guy, the most loyal fighter I’ve ever worked with and one of the most remarkable athletes I’ve ever known,” DiBella said on the SI Boxing Podcast. “I’d rather see him…stay in retirement.”

“If he’s going to come back I want to see him stay healthy, that’s what I want more than anything,” DiBella said. “Do I approve? It’s not for me to approve, it’s not my life. I’m not going to be involved, I declined. He knows how I feel. Doesn’t change how much I love him and doesn’t change the fact that I’m going to be rooting for him. I’m not a fighter.”

Whilst in retirement, Martinez has been involved in acting, comedy and boxing promoting.

With a history of knee problems which played out heavily in the Cotto defeat and with six years out of the ring, the ending to this comeback is generally not thought to be a happy one.