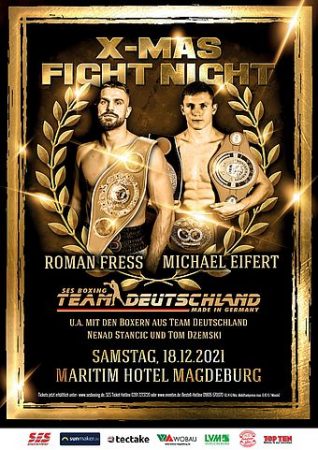 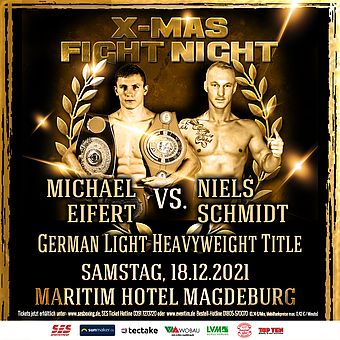 Set the mark for the future now – the entire program for this boxing gala!

SES promoter Ulf Steinforth: “With this fight evening at the end of the year, we want to set a special signal and an outlook for the next year. With the three “Team Germany” boxers Roman Fress and Michael Eifert and Nenad Stancic’s Junior World Championship, we have three great title fights. Further fights with Tom Dzemski and three very young fighters from the “Team Germany” so there are a total of seven fights only with young German talents. It will be a boxing evening, which I am really looking forward to in these special times and which will allow us to start the new year 2022 with courage and confidence! “

The other main fights:

WBO Youth Championship in the lightweight

Another new addition to the SES boxing team:

In addition, the Rostock heavyweight Felix Langberg will get into the ring for his sixth professional fight in Magdeburg

Shortly before Christmas, SES Boxing wants to set an optimistic signal for the future of German boxing with the “X-MAS FIGHT NIGHT” on December 18 in the Maritim Hotel Magdeburg , as well as the success story of “Team Germany ”, a SES project Boxing, keep writing.

SES promoter Ulf Steinforth : “With this fight evening at the end of the year, we want to set a special signal and an outlook for the next year. With the three “Team Germany” boxers Roman Fress and Michael Eifert and Nenad Stancic’s Junior World Championship, we have three great title fights.Further fights with Tom Dzemski and three very young fighters from the “Team Germany” so there are a total of seven fights only with young German talents. This is a special sign of how we promote the next generation in German boxing. With Nick Hannig we also have a new boxer in the SES boxing team who will be a very good match for us in the super middleweight division with his fighting style and his special fan base! It will be a boxing evening, which I am really looking forward to especially in these special times and which will allow us to start the new year 2022 with courage and confidence! “

In “Team Germany” , with its captain Roman Fress and three-time junior world champion Michael Eifert at the top,young SES boxing professionals will present themselves again this year. The Hamburg lightweight Nenad Stancic will now also reach for the WBO Junior World Championship belt. Other youngsters from “Team Germany ” at this event are local heroes from Saxony-Anhalt, Tom Dzemski and Julian Vogel , plus the newcomers Max Suske and Joscha Blin . Even with Nick “Mr. Business” Hannig from Koenigs Wusterhausen to start now in the super middleweight division, a new addition to the SES will present boxing team for the first time in “new flag”!

“Team Germany captain” Roman Fress will now face Adam Usumov from Torgau in the fight for the International German Championship!

In his second title fight for the International German Championship , cruiserweight Roman Fress (14-0-0 (8)) will now face Adam Usumov (20-15-0 (9)) from Torgau. The captain of the “Team Germany” was able to defeat the Italian Luca D’Ortenzi with a point win in October and mastered the expected difficult task after two previous spectacular knockout victories and defended his WBO Inter-Conti title . After several short-term cancellations, the Corona pandemic owed, now comes with Adam Usumov, who lives in Torgau or Leipzig or trained in a proven international title fights tough opponent on novel feeding to. In thisBDB title fight at cruiserweight must the hitherto unbeaten eating in his 15th pro fight, above all, his “clean slate” defend to continue to assert itself in the top 15 in the world rankings of the WBO / WBA and IBF.

Michael Eifert (8-1-0 (2)) , who was born in Bautzen, is now attacking the German championship belt in the light heavyweight division . After the 23-year-old Michael Eifert has “cleared” everything that can be reached in the junior area, this step is logical in his 10th professional fight. In the fight for the biggest national title, he meets the undefeated Niels Schmidt from Wismar. This is clearly more experienced in 20 professional fights with 14 knockout victories and at the “mature” age of 32 years and thus the right test and special task for Michael Eifert in the fight for this vacant German championship.

He is already a WBC Youth Inter-Continental Champion and now wants to fulfill his dream of the Junior World Championship with the upcoming fight for the vacant WBO Junior World Championship lightweight title . The “Hamburg boy” Nenad Stancic (9-0-0 (4)) has just this big career step ahead of him in his 10th professional fight in a duel with the Latvian Marcis Grundulis (10-1-0 (2)). With a success, the 23-year-old would be another junior world champion in “Team Germany” .

Another new addition to the SES boxing team:

He has a solid fan base – Nick “Mr. Business “Hannig , who has pushed his way to the top of the world rankings in the light heavyweight division with tough tasks, will now step into the ring for SES Boxing in the super middleweight division . With nine impressive victories and after a still very controversial defeat in the WBC title fight against a Latvian, the 35-year-old crowd favorite from Königs Wusterhausen is now starting anew and has with the tough Belarusian Siarhei Khamitski (32-23 -3 (14)) to face a difficult task again. With spectacular fights and a tireless boxing style, Nick “Mr. Business “Hannigfought in the hearts of his fans and definitely wants to continue this under the new flag of SES Boxing !

Tom Dzemski , the second successful light heavyweight from the “Team Germany”, now wants to prove himself and himself with a victory against the experienced Czech Tomas Bezvoda after his defeat as the reigning IBF Junior World Champion in the World Cup fight against his teammate Michael Eifert “Round back” as clearly as possible with a win. For his 19th professional fight, the 24-year-old sports science student from Görzig did a lot with a long preparation and worked hard on the “comeback” for his trainer and father Dirk Dzemski .

Welterweight Julian Vogel is now in the sixth professional fight

Julian Vogel (5-0-0 (3)) from Aschersleben wants to end his first year as a professional with a win in his sixth professional fight . Against Jakub Laskowski from Poland , the only 18-year-old student who competes for “Team Germany” wants to continue the well-known boxing tradition in Saxony-Anhalt with his trainer Dirk Dzemski and thus continue his streak of success.

The middleweights in “Team Germany”, Max Suske from Stralsund and Joscha Blin from Hamburg, are particularly in the spotlight as newcomers

New to the “Team Germany” are the native “Northern Lights” Max Suske and Joscha Blin . For Max Suske , after its successful premiere in October, it is the second professional fight that the 19-year-old is now fighting against Gergo Vari from Hungary, who has a total of 51 professional fights . Joscha Blin , who as the grandson of ex-European champion Jürgen Blin wants to continue a great family tradition in boxing, made his professional debut for “Team Germany” with Richard Walterfrom the Czech Republic a clear task. The 24-year-old from Hamburg should at best underline his boxing quality impressively in order to celebrate the most successful debut possible. Both middleweights were prepared for their tasks by trainer Georg Bramowski in Halle / Saale.

In another duel in the ring of the Maritim Hotel, the unbeaten heavyweight Felix Langberg (5-0-0 5)) from Rostock wantsuse the fight evening to present yourself against Sebastian Tuchscherer from Euskirchen for further tasks in the “top class of boxing”.

Attention: This SES box gala is organized under the current conditions of the SARS-CoV-2 containment regulation for Saxony-Anhalt with the requirements of the “2G-Plus access model”.

Current status: Access to the event is only given to those who have been vaccinated and those who have recovered. They must also present a current negative certified test. Those who cannot undergo this test at other test facilities can also do this on site. More information will follow!

The MDR will broadcast this event with its program “SPORT im Osten – boxes live” from 10.45 pm.