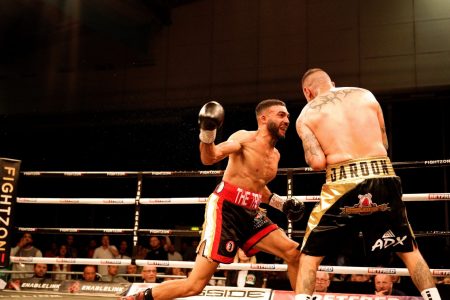 Fight Academy round off 2021 with a show at Sheffield’s Ponds Forge Arena on Friday December 17, broadcast live on Fightzone.

To order this night of action and to subscribe to Fightzone for great weekly boxing – just £4.99 a month (use code ‘boxen247’)

The seven-fight card will feature some of the stable’s best talent – including British Flyweight Champ Tommy Frank, and the return of Anthony Tomlinson (pictured).

Tommy Frank made history in September, becoming the first fighter from Sheffield to win the Lonsdale Belt at flyweight.  The 28-year-old is entering his prime and – after previously picking up the Commonwealth crown at the weight above – looks ready to move onto international honours in 2022.

Tomlinson will be hoping to leave Ponds Forge with better memories than his last appearance there in August, when he was beaten for the first time in 14 fights against Mexico’s Dante Jardon.  The Sheffield welterweight got it wrong that night, being stopped in nine rounds, and is now looking to return to winning ways and get back into title contention over the next 12 months.

“It’s been a really busy but successful year,” explained Fight Academy’s Dennis Hobson, “and I’m pleased to be rounding it off with this show.

“Against the backdrop of a pandemic, we’ve put on more shows than ever, have helped to launch new boxing channel, Fightzone, and have grown our stable. We’ve produced two world champions in Hannah Rankin and Jack Massey, a British champ in Tommy Frank, a Commonwealth champ in Nathaniel Collins, and I guarantee you – with the talent we have – we’ll have more champions next year.

“This is another good show for the Fightzone viewers and I’m just pleased we’ve managed to get it over the line, to be honest.  Originally we were hoping to get Tommy Frank into a fight for the Commonwealth Title and Kash Ali defending his IBF Heavyweight belt on this show, but like every other promoter in the country we’ve faced real difficulties in getting opponents in.  So, it’s just good to be getting some of our home fighters out again before the end of the year, and we’re still in for another entertaining evening of boxing.

“I’m really looking forward to watching our new signing from the Northeast, Tommy Hodgson, who looks special.  Levi Giles is another fighter who’s impressed me, and it’ll be good to see Tommy Frank back in the ring.  Anthony Tomlinson learned a hard lesson last time and he’ll be a better fighter for it; he still has a really bright future and hopefully he’ll round the year off with a win.”