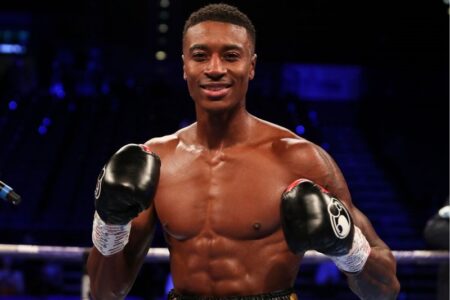 The Birmingham star headlines at the Coventry Skydome Arena on Saturday, November 13, when he takes on the Leeds puncher Reece Cartwright, for the Vacant WBC International Light-Heavyweight Championship, live and free on Channel 5.

Slick-hitter Pitters can’t wait to run rings round Cartwright with a victory putting him back on course towards World title contention.

Pitters’ mother was born and raised in Trelawny, Jamaica, close to Sherwood Content where the legendary Bolt grew up, and he still has relatives there.

Highly talented ‘Big Shak’, who was also a football apprentice at West Bromwich Albion, also showed some early promise on the athletics track when he held the 800m record at his secondary school and believes he would have given Bolt a run for his money.

The 6ft 6in Pitters said: “I had the record at my secondary school (George Dixon International School, Birmingham) for the 800m for a while. I was quite fast when I was younger, but was definitely more middle-distance.”

“I certainly wasn’t Usain Bolt when it came to short distances, but over 800m I’d have given him a good go. It would have to running backwards though!”

“I get all that explosive speed but with me, when people put their bodies through all that pain, I love it. It’s crazy but I love to push through it.

“That is why I was a middle-distance runner as a kid because I just knew how to adapt and stay calm under pressure. Would Usain be able to catch me over 800m? With my daddy long legs? No chance!”

“My promoter Mick Hennessy does a great job promoting fights maybe he could promote a race? I am all up for that if it makes sense and we are making good money. Bolt probably doesn’t need the money, so we’ll settle for 60%. He can get 40!”

In the ring, Pitters would be delighted to follow in Bolt’s global footsteps. Beating Cartwright will move him into the WBC top 15 world rankings, putting him back in the mix alongside the likes of British rivals Callum Smith, Josh Buatsi, Anthony Yarde and Lyndon Arthur on the light-heavyweight blocks.

And forget his 800m exploits when that opening bell sounds. Pitters doesn’t plan on letting Cartwright go the distance.

He said: “I will be going in there to take him out. There’s no great gameplan, it’s just plain and simple, I want to get him out of there. That’s just how I fight.”