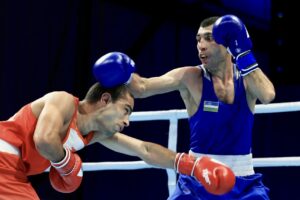 The 10 top qualify of male finals were held in the last competition day at the ASBC Asian Men’s & Women’s Elite Boxing Championships in Dubai, the United Arab Emirates. Uzbekistan’s Shakhobidin Zoirov had a fantastic battle against India’s Amit Panghal in the repeat match of the final of the 2019 AIBA World Boxing Championships. Uzbekistan achieved six, Mongolia three while India one gold medal in the men’s finals.

Altogether 150 boxers including 47 ladies competed for the medals and money prizes at the ASBC Asian Men’s & Women’s Elite Boxing Championships. The money prizes of the competition for the gold, silver and bronze medallists were presented by AIBA Secretary General Mr. Istvan Kovacs of Hungary in Dubai.

Mirzakhmedov defended his throne at the light flyweight (49kg)

Uzbekistan’s Nodirjon Mirzakhmedov arrived to the venue of the ASBC Asian Elite Boxing Championships as the titleholder of the light flyweight (49kg). The 27-year-old Uzbek won the title of the Governor Cup in St. Petersburg, Russia one month ago, where he defeated top rivals by large margin of differences. The Uzbek controlled the first round in the final against Kazakhstan’s 18-year-old Daniyal Sabit, who is their new National Champion in the smallest weight category. Mirzakhmedov stopped the young Kazakh with jabs and counter-attacked him with outstanding hooks in the second round. The nine-year-older Uzbek dominated the contest by impressive technical skills and defended his throne in Asia.

“It is a second gold medal for me in the Asian Boxing Championships but the feeling is amazing once again. I am very happy as my young Kazakh opponent was very good. He is a big prospect for the future but I deserved this gold medal. Thanks to my fans and the support of my team,” commented his success the experienced Uzbek.

Uzbekistan’s Olympic Games winner Shakhobidin Zoirov defeated India’s Amit Panghal in the final of the Yekaterinburg 2019 AIBA World Boxing Championships. The two stars met once again in another final at the ASBC Asian Elite Boxing Championships in Dubai. Panghal had nice hooks in the first round while Zoirov landed tough combinations in the opening minutes of their flyweight (52kg) final. Both of the boxers strived for the gold medal and made a remarkable battle in the championship. Zoirov kept the distance better in the third round which was decisive, and the Uzbek was able to beat his Indian rival once again.

“It was a fantastic contest today, I enjoyed it so much. Amit was much better than last time, therefore I had to keep my full concentration until the last second. I know that it was not our last meeting with Amit and I am expecting that he will be even stronger next time. I made it, and it was an important success for me,” said the exhausted Uzbek after the fantastic final.

Mongolia’s Enkh-Amar Kharkhuu won the 2013 Summer Universiade and qualified for the Rio 2016 Olympic Games, but he was not the favourite against Uzbekistan’s AIBA World Champion and ASBC Asian Champion Mirazizbek Mirzakhalilov. The tough Uzbek started the contest better and landed high number of clear punches but Kharkhuu was able to turn back their impressive bantamweight (56kg) contest in Dubai.

His teammate, the ASBC Asian Champion and Asian Games winner Erdenebat Tsendbaatar dominated the first round against Iran’s 21-year-old Daniyal Shakhbakhsh. The Mongolian lightweight (60kg) boxer was too strong for the young Iranian in the opening minutes of their final. Shakhbakhsh proved better performance in the second ones but Tsendbaatar was confident and claimed Mongolia’s second gold medal in Dubai.

Mongolia’s third finalist was Chinzorig Baatarsukh who achieved silver medals in the main Asian competitions and he aimed for his first gold medal in Dubai. The Mongolian light welterweight (64kg) boxer overcame his former ASBC Asian Champion Shiva Thapa in the attacks and took the lead after three minutes of fight. Chinzorig was a hard target for the Indian who increased his tempo but the Mongolian has done smarter boxing in their final.

“This was my third Asian final and after the silver medals I made it in Dubai. This is a fantastic feeling, I am finally the champion, what is the success of my coaches also,” claimed his success Mongolia’s Chinzorig Baatarsukh.

Uzbek golden moments at the welterweight, middleweight and light heavyweight

Uzbekistan’s Bobo-Usmon Baturov was the defending champion at the welterweight (69kg) and he expected a hard contest against Kazakhstan’s two-time AIBA World Boxing Championships bronze medallist Ablaikhan Zhussupov in the final. His semi-final opponent, India’s veteran Vikas Krishan Yadav was injured in the first round and the same happened with the Kazakh boxer in the final.

Kazakhstan’s Hamburg 2017 AIBA World Boxing Championships silver medallist Abilkhan Amankul and Uzbekistan’s new promising middleweight (75kg) boxer, Saidjamshid Jafarov delivered the next remarkable battle in Dubai. The younger Uzbek is a new addition to their top national team but his athletic skills are amazing and he used it well in the first round. The 24-year-old Kazakh increased his tempo in the second round and after one of his excellent jabs the referee counted Jafarov. The Uzbek was still enough fresh in the third round to win the exciting final and became the new king of the middleweight (75kg).

Their third-in-a-row gold medal was achieved by AIBA World Boxing Championships silver medallist Dilshodbek Ruzmetov at the light heavyweight (81kg) following his success over Iran’s newcomer Meysam Gheslaghi. The Iranian boxer was energetic and brave in the final but he received a lot of punches from longer range.

Sanjeet and Jalolov are the winners of the heaviest weight categories

India’s 24-year-old Sanjeet was quarter-finalist in the Yekaterinburg 2019 AIBA World Boxing Championships and he is a strong prospect at the heavyweight (91kg) but he was not the favourite against Kazakhstan’s Vasiliy Levit. The three-time ASBC Asian Champion Kazakh could not reduce the fighting distance against the taller Indian but he returned to the contest in good shape in the second.

Uzbekistan’s reigning AIBA World Champion at the super heavyweight (+91kg), Bakhodir Jalolov won the title of the ASBC Asian Elite Boxing Championships in 2017 and in 2019. The Uzbek star met in the final with his main rival, Kazakhstan’s Kamshybek Kunkabayev. Jalolov used his longer reach smartly in the first round and the referee counted the Kazakh in the end of the first round. The Uzbek star landed more punches than Kunkabayev and defeated his main rival once again.

List of the winners of the men’s finals in Dubai