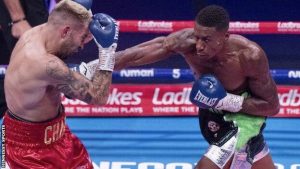 “Chad was very game opponent” Pitters said. “I kept it long and punished him as he came in. He was a very tough opponent but he didn’t trouble me.

“I wanted to keep things basic and it worked. I’m always learning and this was my first 12-rounder. I’d give that performance a six or seven out of ten. It was a decent performance but I’m always improving.

“His legs went he was gone for a bit, if I had stepped on him, I probably could have got him out,” Pitters added. “But I was not going to take any chances. I was way ahead on points, I knew I was winning. All I had to do was keep doing the basics, we knew we could hurt him as he came in.

“It hasn’t quite sunk in. It has been a short career for me so far, this is only my third year, and winning this is a great achievement.”

Michael Jr is the son of fight promoter Mick Hennessy.

The bout was made at Super-welterweight.