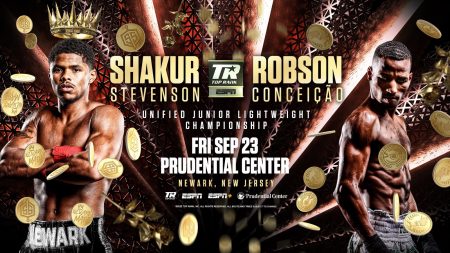 Promoted by Top Rank, tickets starting at $50 are on sale now and can be purchased at Ticketmaster.com. Stevenson-Conceição and the return of lightweight U.S. Olympic silver medalist Keyshawn Davis will be broadcast on ESPN, ESPN Deportes and ESPN+ at 10 p.m. ET/7 p.m. PT. Undercard action will stream on ESPN+ and includes welterweight Jahi Tucker, featherweight Bruce “Shu Shu” Carrington, and junior bantamweight Floyd “Cashflow” Diaz.

Here is what the fighters had to say at the press conference.

“Shakur Stevenson last fought here in July 2019. He now returns as a two-time world champion and a unified 130-pound champion. He’s on everyone’s pound-for-pound list. He’s one of the best fighters in the world. And when all of us travel, and you run into somebody and ask, ‘Where are you from?’ And you say, ‘Jersey.’ They’ll say, ‘What exit?’ But you know what, we say that it’s going to change to, ‘That’s the hometown of Shakur Stevenson.’ That’s how far he’s going to go. And he’s not even close to his prime.”

“On September 23, I’ll have a good performance for you all. It’s my first time fighting in Jersey. I’m going to make it a memorable one. Shakur is a great fighter. This is his hometown, so I’ve got to come strong. I’m going to be here September 23, and I’ll see you all.”

“I just want to make sure I put on a show for everybody. I want to show everybody that I’m scary at 122. And it is what it is. On September 23, me and my guys are going to put on a show. We’re here to take over.”