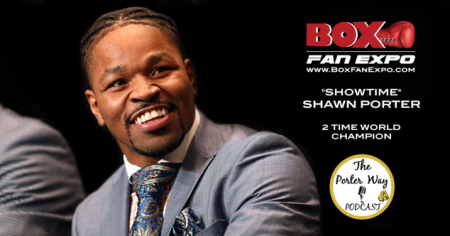 Two-time world champion “Showtime” Shawn Porter has confirmed that he will appear at the Sixth Annual Box Fan Expo on Saturday, September 17, 2022, at the Las Vegas Convention Center from 10 a.m. to 5 p.m. The Expo will also coincide with the mega trilogy fight between Canelo Alvarez vs Gennady Golovkin, that will take place later that evening at the T-Mobile Arena.

Porter will hold a Meet & Greet with his fans at The Porter Way Podcast, and he will be streaming LIVE at his booth during the fan event held over the Mexican Independence Day weekend.

Porter will make his sixth appearance at this years’ Expo and will be signing gloves, photos, and personal items. Boxing enthusiasts will have an opportunity to also take pictures with this fan friendly Boxing Star.

Porter joins Jessie Vargas and Erik Morales as an early commitment to this year’s Box Fan Expo, with more Boxing stars to be announced.

Porter is an American former professional boxer who competed from 2008 to 2021. He is a two-time former welterweight world champion, having held the IBF title from 2013 to 2014 and the WBC title from 2018 to 2019. He is particularly known for his aggressive pressure fighting style, physical strength and high workrate. Some of his most noticeable fights came against Danny Garcia, Keith Thurman, Errol Spence Jr., Adrien Broner, Paulie Malignaggi, Andre Berto and Kell Brook to name a few.

About The Porter Way Podcast

To request information on exhibiting and sponsorship at the Expo:

For any inquiries please email: boxfanexpo@gmail.com