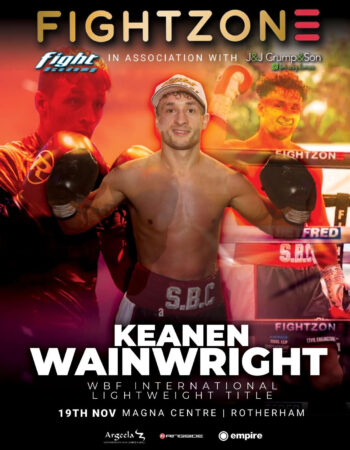 Naz Hamed, Kell Brook, Clinton Woods, Ryan Rhodes, Herol Graham, Dalton Smith, Sunny Edwards – the city of Sheffield has produced some of Britain’s best fighters over the years … could Keanen Wainwright be the next big name from the Steel City?

The 24-year-old ‘Sheffield Boxing Centre’ protégé has had fight-insiders buzzing with some eye-catching performances since turning pro in 2018.  Quiet outside the ring, ‘The Wolf’ has dynamite in both hands and has picked up some statement wins in his 8-1 (5) career by stopping usually durable fighters like Andy Harris, Sean Davis and Irvin Magno.

Next up, this Saturday November 19 at Rotherham’s Magna Centre, Keanen gets his first title fight taking on Victor Julio for the WBF International Lightweight Title LIVE on Fightzone.

Julio – a Colombian fighting out of Spain – is far more experienced with 16 wins from 22 pro bouts.  The 28-year-old – who has only ever been stopped twice and has been the championship distance plenty of times – will provide a good yardstick for where Wainwright is at … and the Sheffield man can’t wait get under the lights and put on another show-stealing performance.

“I’m excited.  I’ve got a 10-round fight for a title – my first one.  I’ve been lined up for the Central Area before but it’s fallen through, and this is also my first 10-round fight, if it goes that far.

“This guy’s got the best record since I turned pro.  He’s done the eight and ten rounds distance a few times – so he’s durable.  He has it in the tank to go into the later rounds and he’s won a few of those distance fights too.  So, it’s an interesting one – I just need to show my skills, open him up and see if I can take him out of there. If I can stop him it’ll be a statement, and that’s what the fans want to see.

“It’d be lovely to box for the English or British next year, or even a European or Commonwealth.  I just want to see who’s got the titles and start knocking on their doors.”

Fight Academy’s Steve Crump has been singing Keanen’s praises since his debut and has no doubts he will fulfil his huge potential: “I knew Keanen was going to be a star when I first saw him fight.  He’s got a great boxing brain, is very measured in the ring but can finish a fight at any time.  He’s just got natural power and that makes him really exciting to watch.

“Sheffield has got an amazing history and is associated with so many of Britain’s top boxers over the years.  Keanen is being built up brilliantly and this fight on Saturday is another good test for him in just his tenth fight.

“It’s great that Fightzone is giving him the exposure he deserves.  It’s such a ground-breaking platform and brilliant for fight fans who are able to follow the journey’s of these fighters who they would normally never get to see.”