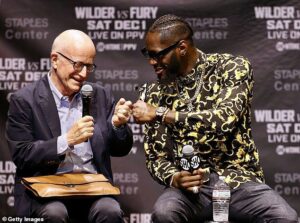 The circus with the back and forth continues with Tyson Fury and Deontay Wilder 3.

Shelley Finkel, Deontay Wilder’s promoter has responded again to the “contract that has timed out” and the December 5th fight that Tyson Fury will be having in the UK against an opponent supposedly (but we can’t see it) from the WBC’s top 15 (click > here <).

Finkel responded to Arum’s comments about the contract expiring by telling ESPN: “He’s entitled to his opinion, he can think anything he wants.

“Deontay and I would like to have the next fight, as planned, against Fury.

“We’ll fight him any date, any place.”

Finkel later also told The Athletic: “I spoke to Deontay [on Monday] night, all Deontay wants is to fight Fury. Any time, any place.

“He’s disappointed. We’ll see what happens in the next day or so.”

Somehow, and this is just an opinion, this does not sound like someone that believes that they have a valid contract, only time will tell.

What would be a good scenario is Fury vs Joshua then Wilder to fight the winner. This is one possibility for sure.

Lucas Browne is Up For Tyson Fury Fight on December 5th Tyson vs Jones Jr. on Nov 28th Reduced To 8x 2 Minute Rounds