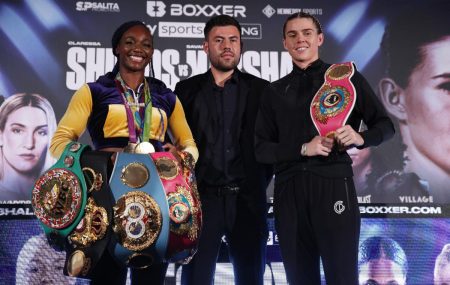 There were numerous heated verbal exchanges between Savannah Marshall and Claressa Shields at today’s official pre-fight press conference in London as the two faced a room packed with media ahead of this weekend’s long-awaited Undisputed World Middleweight Championship contest.

Co-headline fighters Mikaela Mayer and Alycia Baumgardner struck a surprisingly respectful tone, contrasting the insults they’ve been swapping on social media, and in person, throughout the build-up to their contest on Saturday. However, the pair couldn’t resist exchanging heatedly during their face-off.

Ben Shalom, BOXXER CEO & Founder: “It’s been 10 years for both these athletes. We worked hard to make this fight because we believed it was something really special. These two are not only fulfilling their own dreams on Saturday night,  they’re fulfilling the dreams of women’s boxing.

To have women’s boxing alone selling out the O2 on Saturday night is a phenomenal achievement. Women’s boxing wasn’t like this when these two turned professional, you wouldn’t have been able to have an event like this.”

On Mayer vs Baumgardner: “Alycia clearly believes this is her moment, Mikaela believes it will be hers. That makes this an absolutely phenomenal fight with phenomenal talent, and a phenomenal rivalry. This could have headlined any event and I’m delighted it’s happening in the O2 on Saturday night.”

Adam Smith, Head of Sky Sports Boxing Development: “This is a fantastic night, not just for women’s boxing, but for the sport as a whole. Two supremely talented, undefeated world Champions in Claressa Shields and Savannah Marshall going head to head for the undisputed championship. This fight, this rivalry will go down in history, no matter the result on Saturday night.

“Women’s boxing has come so far in recent years, and there’s so much talent in the UK right now, and in the USA also. There’s the scope to have so many huge nights of boxing like this one from now on.

Bob Arum, Hall of Fame Promoter: “People years from now will be talking about this event in the history of boxing. Two huge multi-world title fights and hugely talented women down the whole card. This event will go down in boxing history.”

“I’ve never seen someone live off an amateur win for 10 years of their career. I’ve dominated this sport for 10 years. I won the Olympics, then I won it again. Then I turned professional and won world titles from my 4th fight.

“Champions are not made, they’re born. And I was born to do this.”

WBO Middleweight Champion, Savannah Marshall: “I’ve always respected Claressa, but she doesn’t like that I have an opinion. I saw her box and I thought it was a diabolical performance. She ran down people’s throats that she was going to get a spectacular knockout, and I watched it for 10 rounds, drifted off, and told her how I felt.

“I’ve never said I’m going to knock her out, I’ve said I’m going to hurt her. She’s a bully and she’s going to wake up on the canvas. I can’t wait to take all those belts off her and become the Undisputed Middleweight Champion.”

WBO & IBF Super Featherweight Champion, Mikaela Mayer: “I’ve worked extremely hard to get to this point in my career, so there’s no way I’m stopping now. It’s going to be just as hard to stay in the position I’m in as it was to get here. I’ve gone back and forth with Alycia in the past but I respect her enough to know she’s going to push me hard on Saturday night.

WBC Super Featherweight Champion, Alycia Baumgardner: “This will be a historic night on September 10th and I can’t wait to be part of it.

“I’m ready to go for Saturday and have been preparing for this moment for a very long time. I’m at the top of my game and I’ve been boxing for 20 years for this fight. This Saturday is really going to mark my spot in this sport, who I am as an athlete. I was born for this, made for this, and this is my moment.”

Olympic Gold Medalist, Lauren Price: “I feel proud and privileged to be on this phenomenal card. I’m planning on taking my time in the professional ranks, after all my amateur success. I just want to look classy in every performance and take step ups every time.”

Caroline Dubois: “Having been to the O2 this week, and seeing the atmosphere as fight week has built, it’s showing me the size of this occasion. Now I can’t wait to get in the ring in a venue bigger than I’ve ever fought in and deliver a great performance.

“Women’s boxing moves so fast, before you know it in your career you’re fighting former world champions, and world title challengers, but I’m ready to deliver on Saturday night.”

Olympic Bronze Medalist, Karriss Artingstall: “I’m hoping to show the things I’ve been working on in camp on Saturday night. I need to start my knockout reel pretty soon so hopefully I can start it off and get the stoppage in this fight.

“I want to move as fast as my performances allow me, if I’m winning in style, then I’ll keep making big steps in every fight. The talent across the whole card is absolutely incredible, the main event and the co-main could headline any card going, and I feel so blessed to be part of it.”

Georgia O’Connor: “This is a great event for our sport and I can’t believe I get to be part of it, but I have to focus on my own fight and getting the victory to progress for my career.”

Ebonie Jones: “I’m feeling better than I ever have before and I’m looking forward to taking another step in my career on Saturday night at such a great event. But for me it’s all about getting another victory.”

April Hunter: “I’m proud to be representing the North-east at this event, just like Savannah is. I’ve had a set-back already in my career, and that’s just motivating to give everything I have in all my fights, including on Saturday night.”

Shannon Ryan: “I can’t wait for Saturday night. To be performing on this stage so early in my professional career is amazing, but I’m looking to make a statement. My style is suited to the professional game much more than it ever was for the amateurs, so I’m ready to kick on.”

James Scarrott on a collision course with his next opponent STATEMENT: BOXXER – SHIELDS VS MARSHALL WEIGH-INS