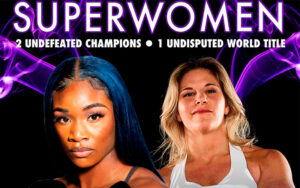 In the 10-round main event of “SUPERWOMEN,’ an historic night of live, all-female pay-per-view boxing (9 p.m. ET/6 p.m. PT) celebrating women’s sports and dedicated to International Women’s Day 2021, undefeated three-division world champion Claressa Shields will attempt to become the first boxer in the four-belt era to become an undisputed world champion in two weight divisions when she faces unbeaten IBF Super Welterweight Champion Marie-Eve Dicaire in a 154-pound unification bout between the #1 and #2 super welterweights in the world. Presented by Salita Promotions in association with Groupe Yvon Michel, the pay-per-view telecast will be available at a suggested retail price of just $29.95 and will be distributed by InDemand to all major cable, satellite and telco outlets and livestreamed by FITE TV through the www.FITE.tv portal. ‘SUPERWOMEN’ will be held on Friday, March 5, from the Dort Financial Center in Shields’ hometown of Flint, Michigan.

The winner of the women’s superfight will walk away with Shields’ WBC and WBO titles, Dicaire’s IBF belt, and the WBA (Super) crown, the first time in its 99-year history that the WBA has awarded a Super Champion belt to a female boxer. In the four-belt era, only seven fighters have been undisputed in one division, including Shields, Katie Taylor, Cecilia Braekhus, Bernard Hopkins, Jermain Taylor, Terence Crawford, and Oleksandr Usyk. Shields, if victorious, will make history as the first man or woman to have become undisputed champion in two weight divisions in the four-belt era.

With the pandemic taking a serious bite out of the sport in 2020, ‘SUPERWOMEN’ will demonstrate and celebrate the power and empowerment of women in combat sports for 2021 and beyond by providing an entire evening of fights featuring some of the best female boxers in the world. Appropriately, the event is dedicated to this year’s International Women’s day (Monday, March 8, 2021) and its theme of #ChooseToChallenge, that looks to call out gender bias and inequity and celebrate women’s achievements.

“I’m excited to be fighting another undefeated champion and to have the opportunity to make history by becoming the first fighter – male or female – to be undisputed champion in two weight divisions in the four-belt era,” said Claressa Shields. “Headlining my first payper-view event with this historic all-women’s card, particularly at such an important time in the evolution of women’s boxing and around the International Women’s Day celebration, is so meaningful to me. We’re going to put on one heck of a show for the world to see. It’s one big step for boxing and one giant step for Womankind. I can’t wait to fight Marie Eve Dicaire on March 5.”

34-year-old Dicaire (17-0) is from Saint-Eustache, Quebec, Canada, and started karate at the age of six. She worked her way up through the ranks until she obtained her black belt. After winning five world championship titles, Dicaire turned her attention to boxing and won the IBF Super Welterweight World Championship in December 2018 by dethroning Uruguay’s Chris Namus at the Quebec City Videotron Center. In her last fight, in November 2019, Dicaire defended her title for the third time beating experienced Venezuelan Ogleidis Suarez by unanimous decision. Dicaire will be fighting outside of the province of Quebec for the first time on March 5.

“I’m happy to finally be able to get back in the ring and face Claressa Shields,” said Dicaire. “It’s been a year now that I’ve been preparing exclusively for this fight. I’m used to making history in women’s boxing. I was the first woman to lead an event in a major amphitheater in Canada. On two occasions, my IBF defenses have been shown on pay-perview in Canada. I have a lot of respect for everything Shields has accomplished; I am excited about this opportunity for my career and for the advancement of international women’s boxing. Like Claressa I am undefeated and, just like her, I am coming to defend my world crown. We are going to have a lot of fun on March 5 measuring our skills, without restraints, and putting on a grandiose and memorable show. We have been waiting for this moment for a very long time. I would like to thank all those who made this event possible and I invite you to be there on March 5 in large numbers!”

“Claressa will be fighting the toughest fight of her career,” said Dmitriy Salita, President of Salita Promotions, “as she strives to once again make history and do what no man or woman has done in boxing against undefeated IBF World Champion Marie Dicaire by winning a second undisputed world title. I am thrilled to be the promoter of her first PPV main event on the important weekend of International Women’s Day. March 5 is going to be a Herstoric night inside and outside the ring live on PPV from the Dort Financial Center in Claressa’s hometown of Flint, Michigan.”

“Claressa Shields and Marie Eve Dicaire are not just undefeated champions in the ring, they are fierce supporters of women’s boxing and equality outside the ring,” said Mark Taffet, President of Mark Taffet Media and Manager of Claressa Shields. “At a time when too many networks in the US are under-supporting women’s boxing, Claressa and Marie deserve tremendous credit for taking matters into their own hands and agreeing to take their undisputed world championship fight to pay-per-view. As the best female fighter on the planet, and with the courage and broad shoulders to carry the message of power and empowerment on behalf of all female athletes, Claressa will not rest until there is equality on every front in women’s combat sports. I am proud of her, and I encourage men and women everywhere to support this SUPERWOMEN pay-per-view fight event on Friday, March 5, so that women fighters can continue to ascend.”

“From the first time I met Marie-Eve Dicaire, I knew she was special,” said her promoter, Yvon Michel. “Her charisma and social intelligence are only matched by her ambitions and uncompromising determination to always prepare well and get better as a boxer and a person every day. These are the same traits I noticed when I first met Roy Jones Jr. and got to know him in training camp. The fight against Claressa Shields and the event on March 5 is going to happen because Marie wanted it and insisted with conviction on doing whatever it takes to make it happen, despite all the constraints. March 5 will be a great day for IBF champion Marie-Eve Dicaire, you shouldn’t miss it!”

The supporting bouts will highlight some of the best talent of today and a look at rising stars of the future and is expected to include outstanding undefeated 6-foot tall 198-lb heavyweight Danielle Perkins, powerful undefeated Floyd Mayweather Sr.-trained light heavyweight Nadia Meknouzi and super-talented current WBA interim super welterweight champion Raquel Miller – all in bouts to be announced over the next days and weeks.

As an amateur, Danielle Perkins was a 2019 Amateur Boxing World Champion. With a dream of becoming world professional heavyweight champion, Perkins registered an impressive victory in her August 20, 2020, pro debut when she knocked down and unanimously decisioned previously unbeaten Monika Harrison. Already a world-class athlete standing 6’0” tall and weighing 197 pounds, Perkins was a standout collegiate basketball player at St. John’s University where she led the team in rebounding and blocked shots including two trips to the NCAA Tournament, followed by a professional basketball career in Europe. After an automobile accident left her critically injured and temporarily paralyzed, Perkins underwent a rigorous rehabilitation program for five years. Upon her recovery, Perkins dedicated herself to boxing and quickly demonstrated great skill. She won the USA National Championships, and then as a member of Team USA, won the 2019 World Championships in Russia, becoming the first American man or woman to win a world championship since Claressa Shields won the gold medal at the world championships in 2016. Perkins trains under the tutelage of trainer James Cooper.

Originally from the country of Morocco, Nadia “The Lion” Meknouzi first rose to prominence around the globe in the martial arts, achieving multiple black belts and remaining undefeated for two years with 200 fights at 2 minutes each, bringing home 40 gold medals. In July 1998, she was honored by His Majesty the King of Jordan El Hussein, decreeing her, “Top Female Fighter.” Meknouzi moved to the USA in the year 2000 and gradually moved away from her combat-sport background. Meknouzi met Floyd Mayweather Sr. in November 2018, who ordered her to get back to training, regardless of her weight of 249 pounds. After just two months, she had her boxing pro debut in December 2018. Meknouzi is trained in boxing by Floyd “Joy” Mayweather Sr and Cromwell “Bullet” Gordon and also continues training in MMA and plans to go back to competition July 2021. Away from fighting, Meknouzi does stunt work in various projects and films.

Known for her exciting, aggressive style, Raquel “Pretty Beast” Miller (10-0, 4 KOs), from San Francisco, CA, won the interim WBA super welterweight title in her last fight against the previously unbeaten Alma Ibarra. She was a U.S. Olympic Alternate, as she lost a close split decision to Claressa Shields in the finals of the Olympic Trials, and she is determined to avenge that defeat in the professional ranks. Prior to winning her world title, Miller seized the NABF belt as well. She was also a 2012 National champion, a silver medalist at the Women’s World Championships and a gold medalist at the 2013 Colorado Springs Golden Gloves tournament.