Shields vs. Marshall: Both fighters get heated ahead of Saturday 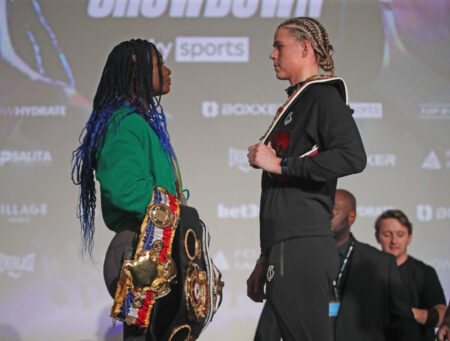 Claressa ‘GWOAT’ Shields and Savannah ‘The Silent Assassin’ Marshall had an intense encounter at today’s official pre-fight press conference in London, exchanging barbs back and forth ahead of their headline showdown this Saturday night atop the BOXXER LEGACY: Shields vs Marshall card.

Ten years in the making, a rivalry which started in 2012 – and which was delayed an extra five weeks due to September’s event being cancelled in the wake of Queen Elizabeth II’s death – is finally due to come to fruition in what is expected to be the most-watched female fight of all time.

Here’s a selection of quotes from today’s press conference. Photos can be found at the above link and are free for editorial use, credit to Lawrence Lustig / Boxxer.

On the outcome of the fight

“I think she comes up short, I believe I’m a better boxer than Claressa and believe I always have been. Saturday couldn’t come quick enough, I’m just itching to get in there now. She can try to knock me out, hurt me, if you’ve got it you’ve got it, if you haven’t you haven’t.

To Shields, regarding her lack of finishes as a professional

“Of course we’re going to talk about the punch power, she may want to fight on the inside or outside, but just to touch and land, that’s really all I see.

“While you’re doing all this talking, you better come in here with that smoke and you better punch as hard as you say you can, because if you’ve got no punching power oh my god it’s going to be a hard night for you. I’m going to show everybody on Saturday there are skills to this.”

On the outcome of the fight

“I’m going to walk out carrying her head, I’m not worried about Savannah Marshall, I came over here, I’m a star in America, don’t get it twisted, I didn’t have to come over here.”