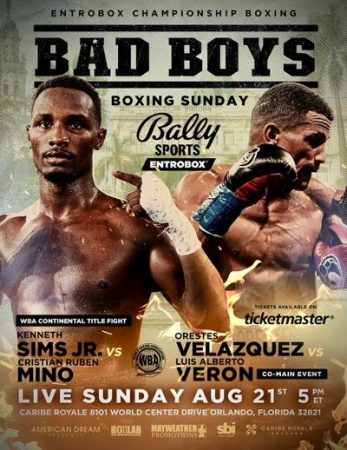 The card is promoted by Boxlab Promotions in association with American Dream Presents. Tickets from $45 are on sale at Ticketmaster.com. Doors open at 4 pm and the first bout begins at 5.

Sims Jr.-Mino is scheduled for 10 rounds and is for the WBA Continental junior welterweight championship.

In the co-featured bout of the evening, junior welterweight phenom Orestes “El Tsunami” Velazquez challenges Emiliano Martin Garcia in a ten round contest.

Born and raised in Cuba but now residing in Miami, FL, Velazquez is 4-0 with all of his victories coming by knockout. On May 7, Velazquez stopped former world champion Juan Carlos Salgado in less than two rounds.

Known as “Pac Man,” Garcia is 17-7 as a pro and 13 of his wins came via knockout. Hailing from Buenos Aires, Argentina, Garcia’s battled many quality fighters including, Harold Calderon, Nestor Bravo, Otar Eranosyan, Denys Berinchyk and Reynaldo Ojeda.

One of the world’s top amateur boxers, Brown won the Cuban National Championship in 2019 and defeated legendary Roniel Iglesais in the finals. Brown defected Cuba in early 2022 for the opportunity to begin his pro career in the United States.

Hailing from Nagarote, Nicaragua, Alfaro’s fought all over the world against some of boxing’s best. In 2007, Alfaro won the WBA lightweight championship by outpointing Pantan Narongwet in Germany but lost his first title defense against Yusuke Korobi in his native Japan. He’s faced Erik Morales and Humberto Soto in Mexico, Jason Pagara in the Philippines, and Cesar Cuneca in Argentina.

“This is a unique televised boxing card,” said Ron Johnson, CEO of American Dream Presents. “Kenneth Sims Jr. is on a roll and earned his way into contention at 140 pounds. Orestes Velazquez appears to be on the fast track to a world title and seeing an exceptional talent in Kevin Brown not only make his pro debut in an eight rounder but doing so against a former world champion is unheard of!”

The Sims Jr.-Mino, Velazquez-Garcia and Brown-Alfaro bouts will be televised on Bally Sports Network and the Bally Sports app live at 7 PM ET.

Derrick “Diesel” Jackson of Orlando takes on his toughest foe to date when he meets Damian Bonelli of Buenos Aires, Argentina in a six round junior middleweight matchup.

Bonelli, 24-11 (20 KO’s), most recently dropped a ten round unanimous decision to Yamaguchi Falcao in an entertaining fight seen on Bally Sports Network.

Lopez, Khan Jr. and Warren are promoted by Mayweather Promotions.

“On Behalf of the Caribe Royale Hotel and Boxlab Promotions, we’re excited to once again bring championship boxing to Central Florida” said Amaury Piedra, of Boxlab Promotions “The goal is always to provide the best fight night atmosphere and quality bouts for the fans in attendance and those watching on the Bally Sports Network. We’re proud of our association with Entrobox and Bally Sports. We look forward to continuing to growing stars of the present and future.”