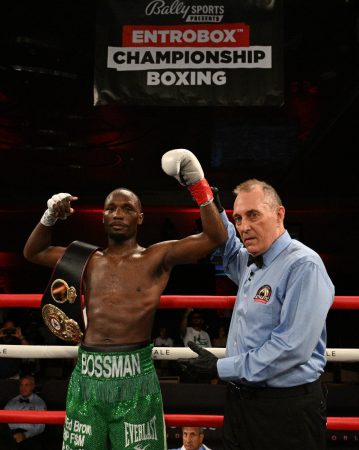 Headlining EntroBox: Championship Boxing presented by Bally Sports Network and the Bally App, Sims Jr. showed he was the superior boxer from the opening bell.

The Chicago native enjoyed a significant height and reach advantage, peppering Mino with well-placed shots. The game Mino tried to close the gap and apply pressure but was dropped with a perfectly timed body shot. Mino was visibly hurt but made it back to his feet as the bell sounded to end the round.

Sensing his opponent was still hurt from the previous stanza, Sims Jr. dropped Mino again with a body shot before ending Mino’s night by scoring another knockdown via a left hook to the head.

“We’re excited with the action from all the fights tonight for both the fans in the seats and cross the nation,” said Ron Johnson, CEO of EntroBox. “Our main event fighter, Kenny Sims Jr. showed the world with pure talent and precision that he earned the WBA Intercontinental belt. This is another championship fight for EntroBox’s archives as we move forward to showcase talent and champions on our platform.”

Hailing from Cuba and now fighting out of Miami, FL, the heavy-handed Velazquez decked Garcia in round two and twice more in the third, putting Garcia out of commission at 2:38 of round three.

One of the world’s top amateur fighters prior to turning pro, Brown is from Cuba but defected in early 2022. Now fighting out of Las Vegas, NV, Brown displayed a high-octane attack that Alfaro was unable to keep up with. In round two, Brown cornered Alfaro and unleashed a powerful combo that sent the former champ down.

Alfaro, who’d taken a ton of clean punches through a round and a half, was unable to continue and Referee Gene Del Bianco stopped the contest at 2:04 of the second.

“We were extremely confident in Kevin coming into this fight,” said Amaury Piedra of Boxlab Promotions. “With his amateur pedigree and boxing skills, we had no issue matching him with somebody like Alfaro, who was a world champion. Orestes was sensational as well and at only 5-0, he’s not far off from facing a top 15-25 junior welterweight.”

Jackson, 9-0 (5 KO’s), was the much stronger fighter and overwhelmed Bailey. Jackson buzzed his Durham, NC based foe in rounds one and two but Bailey showed tremendous heart, never backing down. In round three, Jackson continued to overpower Bailey and dropped him hard with a combination that ended his night at 1:09.

“Derrick looked great and I give a ton of credit to Bailey for coming in as a late replacement,” said Piedra. “He’s now 9-0 and is very mature for a 20-year-old. Derrick’s fully dedicated to the sport and the sky is the limit.”

The card was promoted by Boxlab Promotions in Association with American Dream Presents.