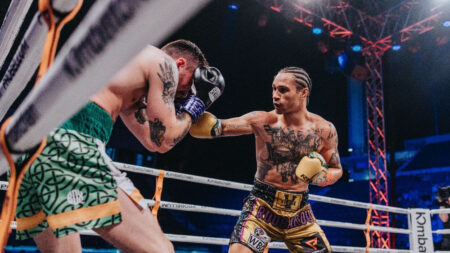 Regis Prograis has listed the six reasons why he will defeat Jose Zepeda and reinstate himself as the best super lightweight in the world.

Prograis faces Zepeda in Carson, California on Saturday night, with the vacant WBC world super lightweight title up for grabs.

The 33-year-old, a former WBA title holder, respects Zepeda but is adamant he will be too much to handle at the Dignity Health Sports Park this weekend.

And ‘Rougarou’ says victory will not only secure him one of the four recognised world belts, but also re-establish him as the best 140lbs fighter on the planet.

“I feel like you can hit me with anything, it’s not going to do anything. But the main thing is he hasn’t fought a workhorse like me, it is one of my strongest suits. I work so hard in training camp, I kill myself. And on top of that, there is my hunger.”

Prograis was rated as the world No1 when he headed into his 2019 unification blockbuster with Josh Taylor in London.

The American lost a classic contest on points that night and insists that by reclaiming one of the world titles, this weekend, he will once again have a strong case to also be known as the best super lightweight around.

“When people introduce me, they do so as ‘the former champ’ you but I want to be the current champion, and not only that, I want to be known as the best in the world in my division,” Prograis said.

“That is even more important to me than being a champion, it’s to be the best in the world in my division.