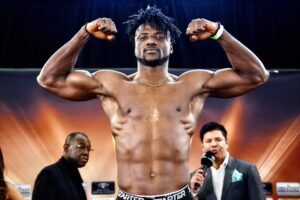 With a boxing record of 13-0, 11 KO’s, unbeaten heavyweight Efe Ajagba is one to watch. Recently parting ways with Shelly Finkel, Ajagba has now signed with Bob Arum of Top rank. Look for a quick path to the heavyweight top ten as he continues to win.

“The people would support Joshua because he is the heavyweight champ” Ajagba tells Sky Sports. “Skill would beat Joshua, not power. Me and Joshua both have the power. But skills control the power. I have more skills.”

Even if he is the champ, Ajagba dos not view Anthony Joshua as the best boxer in the division…

“I don’t think so,” Ajagba says. “The best weapon of Joshua’s is the left hook and right uppercut. He doesn’t have a good jab.

“I respect him. He is the heavyweight champion. I respect everything about him – his talent and his potential. He is a humble guy. People are saying that I talk Joshua down. But I don’t want to do that. Joshua is from Nigeria so he is a part of Africa, too.”

Ajagba so far is a destructive powerhouse, but he does not think himself as one…

“I don’t think so. It’s not about me,” he says. “It’s about the way I throw my punch and how my opponent feels it. It’s not about power. Power comes from how you throw the punch, and how you land the punch. Move your legs into the punch, that’s where the power is.