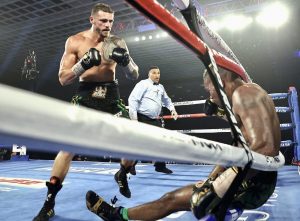 “Coming into this camp, I knew I had to work on my boxing,” said Smith. “I wanted to be sharp, throw a lot of straight punches. I watched his fight with Kovalev, and Kovalev kind of set the way to beat him. So we watched that and worked off of it. I knew coming in today I had to box a little more because he’s got that great right hand. He caught me with it a couple times, but I can take a punch, too.

“Every time he hit me, I wanted to come and stop him in his tracks, and I did that. I stuck to my game plan, and it was a great fight.

“I feel this one is a big one. I really needed it. I wanted to prove I’m not just a knockout guy. I proved my boxing ability, too, and I showed that tonight.”

The bout was halted after the fifth round by Kopylenko’s corner with his left eye nearly shut.

Venue: “The Bubble” at the MGM Grand in Las Vegas.