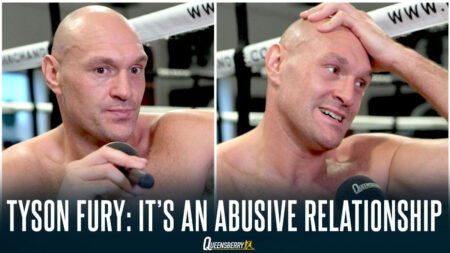 Tyson Fury revealed that he placed himself in near splendid isolation during preparations for Saturday’s WBC world heavyweight title defence against Derek Chisora at the Tottenham Hotspur Stadium.

The Gypsy King has been making merry in Morecambe ahead of trading blows for a third time against his old London rival and insists that boxing has been front and centre for him since training began in earnest.

Key projects were completed or put on pause so his full attention could be paid to what will be a third defence of his WBC belt. A third publication, a hopefully hit single and Netflix filming have been put to one side as focus has been trained solely on the day job.

“I carved out Netflix for the full fight camp so I can concentrate on my opponent. I physically, mentally and emotionally can’t do any more to win this fight. By the time the fight comes I will have done nine weeks training, nine weeks of isolation away from my family.

“SugarHill has been here and will have been for six or seven weeks by the time the fight comes around, I’ve had the nutritionist here for the full nine weeks and I have been alone in Morecambe Bay.

“I can’t do any more than that.

“I am isolating away from the family, keeping them at arm’s length and just living like a fighter. While I am in camp I am in Spartan mode and I can’t be around the family. I’ve got to have this fight attitude in order to win these fights, big fights.

“You can fight six-rounders or against low-level opposition in eight-rounders and stuff and you can fight them anywhere. When you are fighting 12-round fights for the world heavyweight title and everything is on the line, you do have to take it very, very seriously.”

Tyson went on to explain on the Queensberry YouTube channel how his relationship with the Fight Game is currently a harmonious one delivering him peace of mind along with glorious highs.

“My relationship with boxing? I am in a very good place with boxing at the moment. I’m back, I’m hungry, I’m putting the work in, I’m grinding. George Foreman said a long time ago, along with some other boxers, that it is difficult to run along the road at five in the morning when you’ve got your Versace slippers on and your silk pyjamas.

“I don’t find it that way. My attitude is that it’s easier for me running along the road knowing that I’m financially secure and have done all I’ve needed to do. This is a hobby now rather than a business or sport. This is my hobby and what I love to do.

“I’ve been in love with boxing for such a long time from being a little boy and I am 34 now, probably at the end of my career in the next few years. It has been a love-hate relationship and it has been toxic at times, but when it is good, it is very good.

“So we are in that relationship and I don’t just abandon things. I try and make things work and that is where we are at the minute. I’ve wanted to leave a lot of times but it always drags me back. It is like a massive drug and an addiction.

“Boxing is more addictive than any drug ever. Ever. Because you can’t let it go.”

WATCH THE FULL INTERVIEW BY DEV SAHNI BY CLICKING HERE