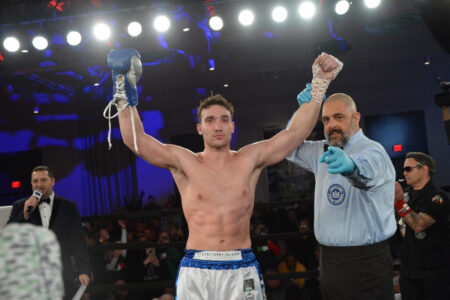 Popular South Philadelphia heavyweight Sonny Conto will take on James Bryant in the six-round headline bout on Saturday, October 29th at the 2300 Arena in Philadelphia.

Conto will be fighting just a mile from his home in South Philadelphia and will look to thrill his large hometown fan base when he takes on Bryant.

The 26 year-old Conto has a record of 10-0 with eight knockouts. This will be the third appearance for Conto at the 2300 Arena. In Conto’s last bout in Bensalem, Pennsylvania on May 13th, he stopped Justin Rolfe in three rounds.

Bryant of Pittsburgh, Pennsylvania has a record of 6-1 with four knockouts. The 37 year-old Bryant is on a three-fight winning streak, which includes his most recent outing when he decisioned Thomas Hawkins on March 7, 2020 in Pittsburgh.

Bryce Mills (9-1, 4 KOs) of Liverpool, NY will look for his fourth consecutive victory when he takes on Larry Fryers (11-5-1, 4 KOs) of Yonkers, NY via Clones, Ireland, in a six-round junior welterweight bout. This will be the third consecutive appearance for Mills on a Joe Hand Promotions card, as he has wins over Daiyaan Butt, as well as a September 1st victory defeating Carlos Marrero.

Carlos Marrero (3-8-3) of Bridgeport, CT will be fighting Tyree Arnold (1-4) of Philadelphia, PA in a four-round junior welterweight fight.

Tyler Zwicharowksi (1-0, 1 KO) of Philadelphia, PA will take on an opponent to be named in a four-round middleweight fight.

Founded in 1971, Joe Hand Promotions is the nation’s oldest and largest television distributor of pay-per-view and closed circuit sports and entertainment events, such as the Ultimate Fighting Championship (UFC), championship boxing, and concerts. JHP’s event consultants provide their marketing knowledge and promotional expertise to help commercial establishments grow their business through the use of live sports and entertainment programming. Additionally, JHP hosts 4-6 live boxing events per year in the Philadelphia area. These events have held sold-out crowds at various venues and arenas.