Sonny Conto takes on James Bryant in Philadelphia this Saturday 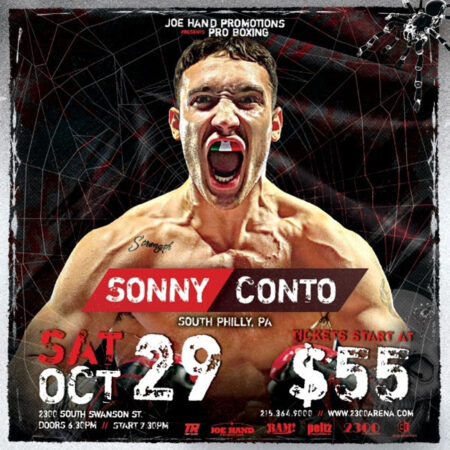 Saturday, October 29 will be a busy night at 2300 Arena in South Philly. Heavyweight Sonny Conto (10-0, 8 KOs) will take on James Bryant (6-1, 4 KOs) in the six-round headline bout on Saturday. The Philadelphia Phillies will be in Houston facing the Astros in game 2 of the World Series. Jake Paul and Anderson Silva clash on Showtime PPV, all on the same night.

Along with the live fights in the main arena, the Phillies game will be broadcast on one of the large TV screens, and at 9 pm ET, the 2300 Arena Bar area will be showing the Jake Paul vs. Anderson Silva event. What better way to spend Saturday night as a sports fan in Philadelphia.

Bryce Mills (9-1, 4 KOs) of Liverpool, NY will look for his fourth consecutive victory when he takes on Larry Fryers (11-5-1, 4 KOs) of Yonkers, NY via Clones, Ireland, in a six-round junior welterweight bout.

Carlos Marrero (3-8-3) of Bridgeport, CT will be fighting Tyree Arnold (1-4) of Philadelphia, PA in a four-round junior welterweight fight.