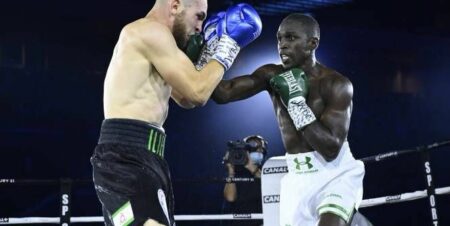 Souleymane Cissokho showed one of his best versions at home and delighted the audience at Roland Garros, in Paris, in his defense his World Boxing Association (WBA) Intercontinental crown. The super welterweight fighter forced the Russian Ismail Iliev to retire after the fourth round to retain his regional title.

The French fighter with Senegalese roots was coming off an unconvincing performance last May but today he again brought out the best of his boxing and showed why he is one of the most interesting fighters in the division today.

Cissokho walked the ring perfectly, used his jab well and was able to hit the Russian hard walking backwards to undermine his humanity. In the fourth round he landed a right hook that hit Iliev’s face and sent him to the canvas as the round ended.

The challenger was able to get up but continued to take punishment until the round ended. By the fifth round, the fact that he had been knocked down, and he had been cut on his eyelid since the third round, the corner decided that Iliev would not come out to fight and the victory was decreed in favor of the Frenchman.