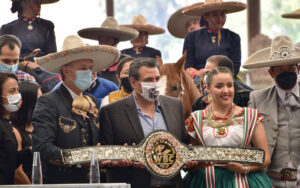 Today at the beautiful Villa Charra de Toluca, the World Boxing Council, the Secretary of Culture and Tourism of the Government of the State of Mexico and the Union of Charros Associations of the State of Mexico, presented the commemorative May 5 “Mestizo Belt” that Saúl Álvarez and Billy Joe Saunders will dispute on May 8 at AT&T Stadium in Arlington.

The presentation began with a splendid parade led by the Queen of the Union of Charros Associations of the State of Mexico, the contingent of skirmishes and the contingent of charros, in what was a demonstration of elegance full of Mexican symbolism.

After several exhibitions and a warm welcome from the secretary of the Union of Charros Associations of the State of Mexico, Aquilino Salgado Monroy, the moment everyone was waiting for arrived, and thus, among an incredible traditional folk dance, the beautiful “Mestizo belt” was unveiled. from the hand of the former world champion Humberto Gonzalez and the Queen of the Union of Charros Associations, Carla Daniela Estrada.

Made by third-generation saddlery and artisans from Toluca, Vianey Flores Martínez and Raúl Pérez Carmona, who explained that this work of art is inspired by charrería, one of the cultural riches of the State of Mexico that won great popularity and roots in Mexico, since 1880.

It is worth mentioning that the Charrería -registered by UNESCO as Intangible Cultural Heritage of Humanity in 2016- is a universal symbol of the Mexican through its objects, values ​​and activities, which are reinvented and adapted generation after generation, for which it has achieved its permanence and positioning as one of the best in Mexico.

Vianey and Raúl, who worked around 300 hours, explained that for this belt, three processes had to be carried out, first the leather work, which refers to the work and dyeing of the leather that serves as the base, then the stippling which is the chiselling of the figures on the skin, to be able to mark them and finally the embroidery that is made in pita or ixtle fibres, with special needles.

Within this beautiful, handcrafted piece we find figures that symbolize 4 of the 9 charro luck that are:

Cala a Caballo: consists of demonstrating the schooling of the horse.
Manganas on horseback: it consists of blooming the rope, looping the front legs of the mare and ending up placing her down, all this while she is riding a horse.
Manganas on foot: consists of flowering the rope, looping the front legs of the mare.
Horseback riding: which consists of taming the mare by riding her until she is accustomed to this.
In addition, of course, a classic or “ramada” decoration and figures that symbolize the equestrian tradition. The center of the belt is again made of obsidian, this time with gold trim, to give greater prominence to the Mexican masterpiece.

For WBC President Mauricio Sulaimán, it is an honor that the emblematic belt of the body is created for the most special dates for Mexico (May 5 and September 15) with the most important symbolisms of our different cultures, and commemorative belts are prizes won by boxers who fight on the aforementioned dates, thus creating a tradition for boxing by highlighting two dates that are 100% boxing and that fans are eagerly waiting for.

The WBC President expressed great satisfaction, at being able to recognize the greatness of Mexico through this belt that embodies with every detail the beautiful tradition of charrería; He stated that the final result was beyond what he imagined, because its sheer beauty is only the result of a work done with the heart.

He thanked being able to be present at this great event and to be able to witness a demonstration of a national sport, namely charrería.

Let us remember that until today there are 8 commemorative belts: Huichol 1 and 2, Maya 1 and 2, Chiapaneco 1 and 2, Mazahua, Otomí and now this beauty that is the Mestizo belt.