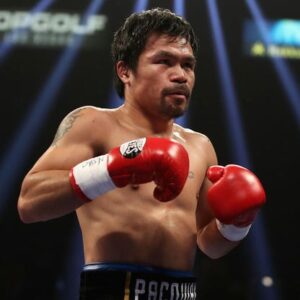 Unified Welterweight Champion Errol Spence Jr. was forced to withdraw from his blockbuster FOX Sports PBC Pay-Per-View showdown with eight-division and former welterweight champion Manny Pacquiao on Saturday, August 21 from T-Mobile Arena in Las Vegas due to a retinal tear in his left eye.

WBA Welterweight Champion Yordenis Ugas will step up to replace Spence and will defend his title against Pacquiao, who won that title when he defeated Keith Thurman in his last fight July 2019. Ugas was preparing to make his first title defense against Fabian Maidana in the co-feature of the Spence-Pacquiao card. Being elevated to the main event against boxing legend Pacquiao means Ugas will get a career-defining fight sooner rather than later.

Spence discovered that he had a torn retina during a pre-fight medical examination by the Nevada State Athletic Commission in Las Vegas on Monday. He flew back home to Dallas, Texas on Tuesday and will have surgery to repair the tear on Wednesday. Spence is expected to make a full recovery and return to the ring.

“I’m very disappointed that I won’t be able to fight Manny Pacquiao on August 21,’’ Spence said. “I was excited about the fight and the event. Unfortunately, the doctors found a tear in my left eye and said I needed to get surgery on it ASAP and that there was no way I could fight with my eye in that condition. I’d like to apologize to everyone. You know I’ll be back as soon back soon. We’ve come back from worse.’’

“First and foremost, I ask everyone to join me in praying for a full and complete recovery for Errol Spence Jr.,’’ Pacquiao said. “Thank God his physical examination discovered his eye condition before he suffered any further damage. I have agreed to fight Yordenis Ugas on August 21 for the WBA welterweight super championship. The proper way and the only way to win a world title is inside the ring.”

“It’s an unfortunate turn of events that Errol has a retinal tear and subsequent surgery has prevented him from participating in this big pay-per-view event. We wish him a speedy recovery and look forward to his return to the ring,’’ said Tom Brown, President of TGB Promotions. “We’re excited that Manny has agreed to move forward and Ugas has stepped up to defend his title against the man who once held the title. Ugas was in the co-feature and had been preparing to fight on this date, so he’s ready. It’s a major challenge, because now he has to make his first title defense against a boxing legend in a career-defining fight.’’

The 35-year-old Ugás (26-4, 12 KOs) has established himself as an elite welterweight since returning from a layoff in 2016 and was elevated to world champion in January after winning a WBA Championship belt by defeating Abel Ramos last September. Ugás, who is from Santiago, Cuba and now lives in Miami, Florida, was on an eight-fight winning streak before losing a narrow split-decision to Shawn Porter in a world title fight in March 2019. The Olympic bronze medalist trains in Las Vegas and owns victories over then undefeated fighters Jamal James, Omar Figueroa Jr. and Bryant Perrella, plus veteran contenders Thomas Dulorme and Ray Robinson.

“It’s an honor to fight the great multiple division world champion, Manny Pacquiao, as I am more than ready to take on this challenge,’’ Ugas said. “I have a tremendous amount of respect for Pacquiao, but I am coming to win this fight. I’ve been in camp working hard with my coach Ismael Salas and I know together we will come up with a masterful game plan to combat anything Manny will bring to the ring. I wish Errol Spence Jr. a speedy recovery and I want to ensure the fans that I will be at my best for this fight.”

“Everyone knows my story about how I came to America to follow my dreams of becoming a world champion, and now it’s time to stamp my legacy with a victory, as one of the best Cuban fighters to ever put on a pair of gloves. I love my country and I want to dedicate this fight to all the men and women who are fighting for freedom.’’

Tyne, Tees and Wear Female Regional Squad get back to it WBA orders direct rematch between Gabriel Maestre and Mykal Fox