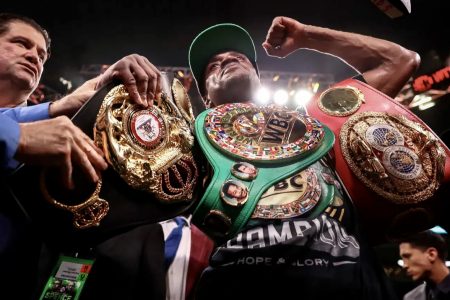 The Big Fish successfully navigated treacherous waters on Saturday night to pick up a third welterweight title. IBF and WBC welterweight champion Errol “The Truth” Spence Jr. showed his greatness against WBA champion Yordenis Ugás, battling back from early adversity to stop Ugás in the tenth round on SHOWTIME PPV live from AT&T Stadium in Arlington, Texas headlining a Premier Boxing Champions event before an announced crowd of 39,946. Click HERE to watch the Spence victory announcement.

The remaining welterweight title not in Spence’s possession belongs to WBO titleholder Terence Crawford, who was an interested observer on Saturday, Tweeting his reaction to the Spence victory. Spence made clear his preference for his next opponent.

“Everybody knows who I want next,” Spence said. “I want Terence Crawford. That’s the fight that I want. That’s the fight everybody else wants. Like I said, I’m going to get these straps then go over there and take his too. Terence I’m coming for that belt!”

Spence had to overcome some harsh conditions courtesy of Ugás to get to this point. After Ugás hurt Spence in the sixth, knocking his mouthpiece out with an uppercut, Spence of DeSoto, Texas, stormed back to hurt Ugás repeatedly to the body and eye. By the tenth round, Ugás’ right eye was completely shut when referee Laurence Cole stopped the contest for the second time to allow the ringside physician to inspect the damage.

Unlike earlier, the doctor advised Cole to stop the bout at 1:44 of the tenth round, giving Spence (28-0, 22 KOs) a resounding victory, a third welterweight belt, and perhaps the greatest triumph of his still accumulating career following a 17-month layoff after corrective surgery to his left eye forced him to pull out of a mega-fight with Manny Pacquiao. Ugás stepped in for Spence on late notice, beating and retiring Pacquiao last summer, setting the stage for Saturday’s welterweight unification contest, just the 12th in the division’s history.

“I believe that you’re going to go through trials and tribulations,” Spence said. “I went through a lot of trials. I got tested and I passed the tests due to my upbringing. My mother and my father always telling me not to quit and not to give up and just believing in myself and my family. I wanted to prove them wrong, and I knew that I could come back. Why would I quit now?”

Ugás’ size and skill appeared to confound Spence early on. The Cuban Olympic bronze medalist hurt Spence with a right uppercut and a right hand that had Spence falling back into the ropes and sent his mouthpiece flying in the sixth. The referee interrupted the action with 1:32 left in the frame to allow trainer Derrick James to replace the mouthpiece. Following the break, Spence returned fire, banging to Ugás’ body to end the frame on a high note.

The referee again interrupted the action with 53 seconds left in the eighth to have the doctor examine Ugás’ right eye, which was nearly shut, the result of Spence timing Ugas with hard right hands. Spence jumped on him moments later, nailing Ugás (27-5, 12 KOs) to the body, sensing the end may be near.

Ugás appeared to hurt Spence to the body with a right hand in the ninth and again with a left to the body, for which he was warned by the referee for veering a little low.

Spence came back and hurt Ugás with a right to the body in the tenth that had him retreating, covering up, clearly in pain. The referee again had the doctor check on Ugás’ right eye, this time deciding he had sustained enough punishment. Ugás screamed in dismay, clearly wanting to continue, while Spence shouted to the rafters in pure joy and stomped his feet on the canvas.

“I feel sad,” Ugás said. “I trained really hard for this fight. All my respect to Errol Spence. He’s a great champion. I’m just sad about what happened tonight. The referee stopped the fight, but I wanted to keep going to the end. I definitely had a chance to win the fight in the sixth round, but he recuperated well. Congratulations to him and his team.”

A monster left-right hand combination from Cruz sent Gamboa careening into the ropes, causing the referee to wave the bout off at 1:32 of the round of the scheduled 10-round lightweight bout. Cruz threw 36 power punches per round landing an average of 11 per round.

“I’m here to defeat and dethrone anyone that gets in my way while putting on a show for the fans,” Cruz said. “I wanted to send a clear message to the division that I’m here to be a world champion no matter what. Mexico, just wait until we arrive. We have something special planned for you when we come back to celebrate.”

Cruz (23-2-1, 16 knockouts) hurt Gamboa with a big left hook early in the first round. Gamboa stumbled back against the ropes, his balance off, legs wobbly and held on to survive the remainder of the round.

Cruz dropped Gamboa (30-5, 18 knockouts) with a right-left combo with seconds left in the second round that buckled Gamboa’s legs and caused him to touch the canvas.

Cruz jumped him to start the third, knocking him down again seconds into the frame with a left hook. But again, Gamboa danced his way out of trouble again to make it to the fourth. In the fourth, Cruz dropped Gamboa again with a left hand toward the end of the round.

José Valenzuela (12-0, 8 knockouts) made a startling statement about his punching power and future in the lightweight division in his bout with former champion Francisco Vargas. Valenzuela landed a looping left hand that sent Vargas crashing to the canvas, prompting the referee to immediately stop the scheduled 10-round lightweight bout at 1:25 of the first round in Saturday’s second pay-per-view bout. Click HERE for the knockout.

A stablemate of unbeaten two-time world champion David Benavidez, Valenzuela, 22, stepped back to avoid the 37-year-old Vargas’ jab and launched forward with a windup left that landed clean. Vargas (27-4-2, 19 KOs), who won a 130-pound title in 2015, dropped his second straight while Valenzuela has now stopped seven of his last eight opponents.

“I worked hard for this and stayed calm, and I stayed patient and went for it when I saw the opening,” said Valenzuela, who referenced the support of Benavidez, standing in the ring next to him. “Working alongside this guy right here, David Benavidez, he has shown me a lot of things in and out. I look to see what he does and what he goes through. He tells me to be patient and that’s what I did. I was expecting (Vargas) to get up but when I took a look back, I knew. It was a good knockout.”

Canada’s Cody Crowley remained undefeated with a tough, punishing unanimous decision victory against veteran contender Josesito López in a 10-round contest of all-action welterweights that kicked off the PPV telecast. The scores were 98-91, 98-91, 99-90 for Crowley.

Crowley (21-0, 9 KOs) sent Lopez to the canvas with a cuffing right hand that seemed to graze the back of Lopez’s head and was deemed a knockdown by the referee. Though Lopez (38-9, 21 KOs) wasn’t hurt in that sequence, he was wobbled throughout by heavy shots, his left eye nearly shut, and his legs unsteady in the later rounds.

Still, as he has done against Canelo Alvarez, Marcos Maidana, Andre Berto and Victor Ortiz, the “Riverside Rocky” soldiered on, refusing to let his corner stop the fight even though he was offering little resistance. Crowley, who, according to CompuBox landed 41% of his power punches and 53 of 440 jabs, was back in action following a sterling SHOWTIME debut in December 2021 when he topped previously unbeaten Kudratillo Abdukakhorov by unanimous decision.

“I want to bring a world title back to Canada,” Crowley said. “Canada supports so much. You see what happens when the Raptors win a championship. The Toronto Maple Leafs hardly make it to the playoffs, and they sell out every single game. Canada just needs a horse to ride behind and I’m that horse. I guarantee we’ll sell out every arena when you bring Cody Crowley.”

The event was promoted by TGB Promotions and Man Down Promotions.

The SHOWTIME PPV will re-air on Saturday, April 23 at 9 p.m. ET/ 6 p.m. PT on SHOWTIME. All ACCESS: SPENCE VS. UGAS – EPILOGUE will follow the SHOWTIME PPV replay.