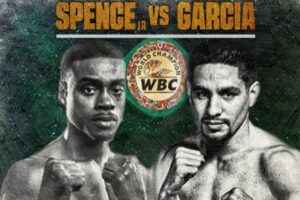 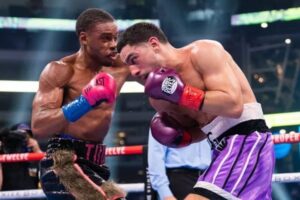 “He was the better man tonight. No excuses. I fought a hard and tough fight. He had a good jab and that was the key to the fight. He was also a bit busier than me…I just have to rebuild and see what we do next.”

“The moment is surreal. Coming back from the accident, I feel like I looked pretty good tonight. All training camp I felt good. I told people I didn’t want a tuneup fight. I proved to everyone that I’m the best 147-pound fighter in the world. Danny Garcia pushed me to the limit, especially in training camp. I’ve watched him fight since he was an amateur. I knew he was a great champion and I had to be 100% ready.

“I give my performance a B. I think I had a little bit of ring rust.

“But I was in such great shape and took everything seriously in training so that I would not be discouraged by that. I worked my jab and used my angles because that was my best move.

“I’m just thinking about seeing my kids tomorrow and hanging out on my ranch. I’m going to eat some good food and we’ll see what the future holds. It’s been a long year and a half, so I’m going to wind down for a week or two, then get back on it.

“It was a lifelong dream of mine to be a household name in Dallas and I’ve done that. I’m thankful to have that support. I was smiling walking to the ring because it was a long road back. It took a lot of trials and tribulations to get to this point tonight, and it all paid off. I’m here for a reason.

“I proved that I’m back and here to stay. I’m the unified champion of the world for a reason.

“I felt some of his punches, but it wasn’t enough to discourage me from coming forward. He was strong and I give him his kudos. He came to fight and tried to take my titles, but I defended it well at home.

“I’m glad that my hard work and path to get back ended with my titles around my waist again in my hometown in front of my home fans.

“I think I hurt him a bit, but Danny Garcia is very gritty and he’s not going to cower down to anybody. I thought I got him a couple times to the body, but I knew he wasn’t going to back down. He’s a real fighter.” 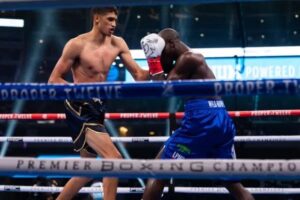 Fight Notes: Time of the stoppage was 1:30 of the 2nd round. 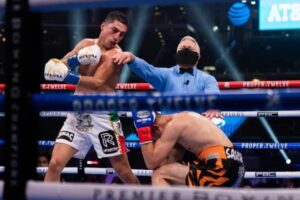 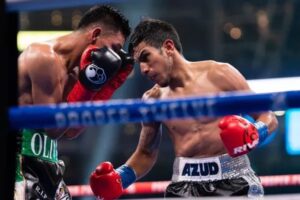 Fight Notes: Time of the stoppage was 0:20 of the 5th round.

Fight Notes: Scores read 59-53 twice for Delgado and 57-55 for Brooks as Delgado came out with split decision victory.

Fight Notes: Time of the stoppage was 2:31 of the 5th round for a Martin win.