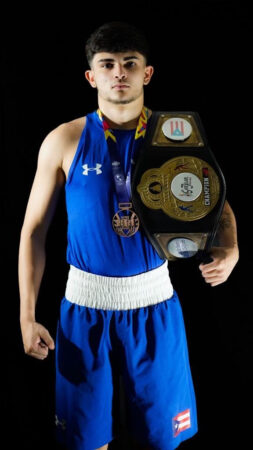 Split-T Management is excited to announce the signing of Puerto Rican amateur star Willito Ortiz. Ortiz, 19-years old of Bayamon, Puerto Rico, has already built a major name for himself across the island despite only picking up the sport five years ago. A rangy southpaw with ferocious power, Ortiz has dominated the opposition since stepping onto the amateur circuit – compiling a total record of 48-4 and winning four National Championships in a row (2019-2022).

“I am thrilled and extremely proud of this signing,” said Split-T’s Ricardo Figueroa. “Willito Ortiz has all the makings of a super star! He’s a young, skilled, power punching southpaw and I truly believe that with hard work and dedication, he will one day be a World Champion.”

The signing of Willito Ortiz signifies a larger move by Split-T Management to expand its role in Puerto Rican boxing, led by the efforts of Figueroa.

“The addition of Willito Ortiz is a major development in Split-T’s quest to find and work with the best talent on the island of Puerto Rico. Willito was a matchup nightmare in the amateurs with his size, length, and, above all else, explosive punching power – and we expect this to continue into the pro ranks. (Split-T’s) Ricardo Figueroa is doing an excellent job in expanding our role in the ecosystem of Puerto Rican boxing and the signing of a rising star such as Willito is a reflection of that. We’re thrilled to see how this develops. “

Ortiz will make his professional debut on a significant stage at the 2022 World Boxing Organization Convention in San Juan, Puerto Rico. The annual WBO Convention is one of the premiere events for top, young talent to showcase their abilities in front of the entire boxing industry. Miguel Cotto Promotions is in charge of promoting the WBO’s “Tournament of Champions” Boxing Show on which Ortiz will be making his debut on October 26th at the famed Pedrín Zorrilla Coliseum in San Juan.

“I am very happy and thankful that Split-T and David McWater believe in me and are allowing me to be a part of the number one management company in the world. I also want to thank the WBO and President Paco Varcarcel for the opportunity to participate in such a prestigious event as the WBO Convention and, of course, Miguel Cotto and Cotto Promotions for the opportunity to be on their promotion. Everyone can expect big things from me and my team, from Bayamon to the world,” said Ortiz.

A product of the renowned Monterrey Boxing Club in Bayamon, Ortiz will begin his professional career at welterweight.