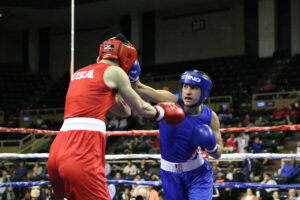 Nothing in boxing has come easy for 2020 USA Boxing Olympic Qualification Team lightweight alternate Amelia Moore, who has overcome several major obstacles to be the elite boxer that she is today.
A native of Maine, the 31-year-old Moore attended the U.S. Naval Academy in Annapolis, Maryland for two years, voluntarily leaving there for medical and personal reasons.
“Discharge was my choice,” Moore explained. “I don’t know where I’d be, health-wise, without boxing. It’s helped me. There were no cutting corners. I pushed to find out more about Crohn’s. I needed to find answers, not systematic band-aids that doctors tried.
“I have no regrets. I’m wearing the flag a different way now (representing the U.S. as an international boxer). I believe in doing what’s best for you. Maybe I can be a light for somebody else.”
Moore notes that it was announced in 2009 that women’s boxing would be added to the Olympic Games in 2012.
“Boxing had been kind of taboo (for women) when I first started getting interested in boxing,” Moore said. “I remember hearing (at the US Naval Academy), ‘I didn’t know we trained women boxers here.’ You had to box, swim or wrestle at the academy, but nobody in my brigade would fight me, or at other service academies like males do. I was feisty. I said thanks for not having the vision.”
To train at the U.S. Naval Academy, Moore would sneak off campus and run a couple of miles to her car, drive to a boxing gym and then back to the academy.
“I was pushed to find my foundation coach,” she continued. “In February of 2015, I found Thomas Longley, Sr. and that’s why I’m a boxer.  I’m still in the Beltway area when I’m not training in Colorado Springs or at tournaments.”
In addition to being an elite boxer, Amelia works full-time as an accountant for hospitals in Colorado handling reconciliations. Because she works remotely, she trains, competes, and travels without distractions from her training, but she needs to work because she’s self-funded.
Known as a heady boxer, Amelia adapts to the situation at hand in the ring, taking an intelligent position of punching without being punched, the core of pure boxing.
Highlights of her solid amateur career are taking top honors at the 2018 Boxam Tournament, as well as gold-medal performances at the 2017 Elite National Championships and 2017 National PAL.
“Standing on the podium at the Boxam Tournament is still an inspiration for me,” she added, “and Spain was awesome.”
Moore, who is the alternate to Rashidi Ellis, has definitive goals starting with a victory at the 2020 USA Boxing National Championships, postponed due to the COVID-19 pandemic from last December to March 25 -April 3, in Shreveport, Louisiana.
Moore remarked, “I want to win these Nationals and medal at the World Championships later this year.”
It’s hard to believe that women’s boxing has only been part of the Olympic Games since 2012. Amelia Moore is a trailblazer whose dedication to the sport has helped improve respect worldwide for female boxers.